On October 16th, 2019 Casey Chambers posted up a tweet with a screenshot of the e-mail signifying that he and his teammates had been banned from Hearthstone competition for six months, starting from October 8th, 2019 to April 8th, 2020.

Happy to announce the AU Hearthstone team received a six month ban from competition. While delayed I appreciate all players being treated equally and no one being above the rules. pic.twitter.com/mZStoF0e0t

Look mom I made it… pic.twitter.com/7kRURG822U

In case the tweet gets deleted or removed, you can see the notice from Blizzard below. 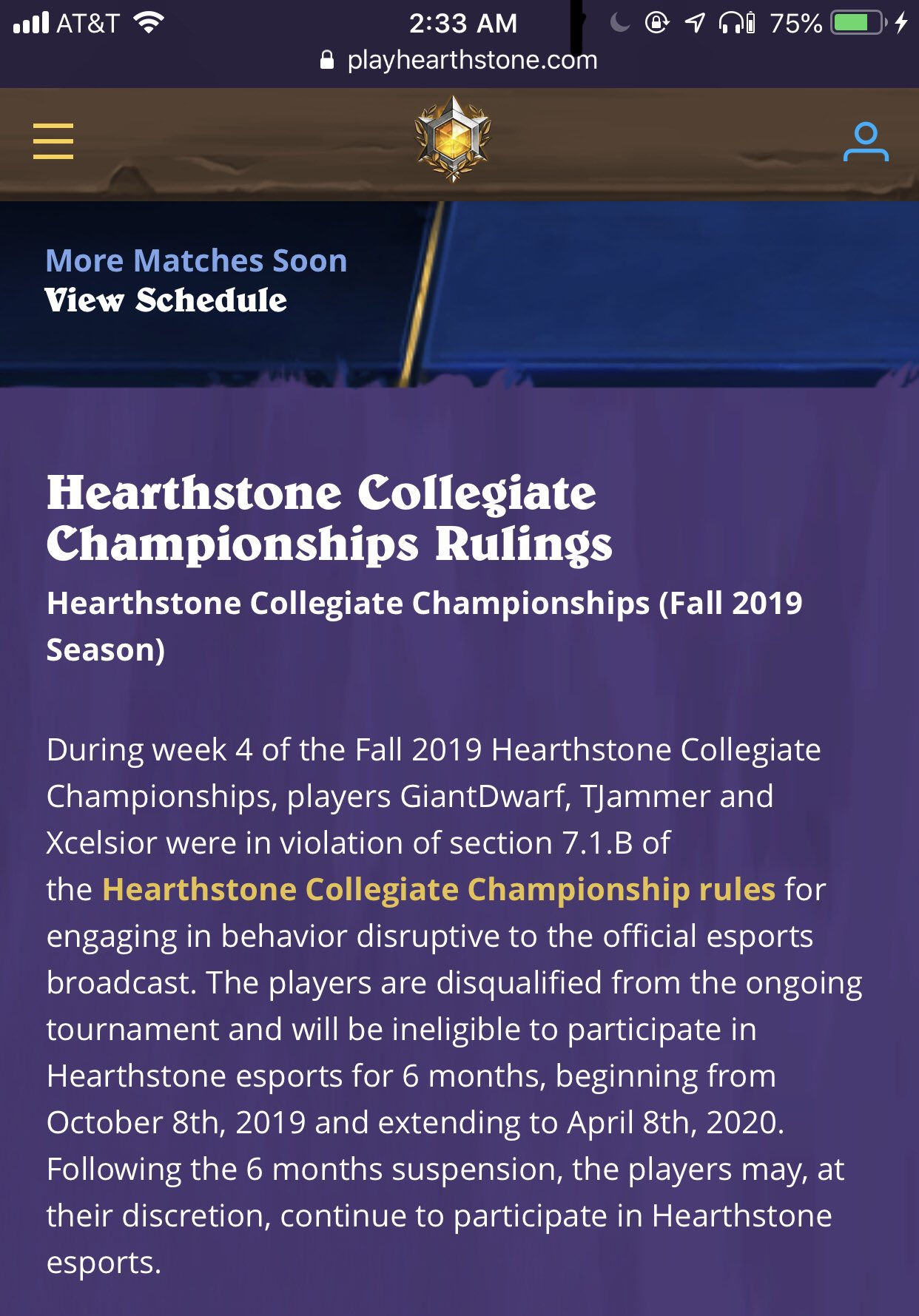 If you attempt to search for the notice on the official Hearthstone website, you won’t find it in the news section or broadcast anywhere on the front-facing aspects of the website, as of the writing of this article.

Basically, this was a silent suspension, likely done in hopes to keep from making waves in the media.

Thankfully some YouTubers are already spreading the word about Blizzard’s retroactive censorship, such as TheQuartering, notifying gamers about the company’s insistence on protecting the PRC’s interests.

It also looks especially egregious that the company is continuing to enforce censorship and bans on players simply because they’re advocating for free speech and human rights.

Originally Blizzard opted not to ban the players when they first held up the sign during the October 8th competition, but American University elected to resign from competition anyway to stand in solidarity with Chinese player, blitzchung, who had been banned from competition for saying “Liberate Hong Kong. Revolution of our times!” during a post-game interview.

After receiving global condemnation from gamers, media, and politicians alike, Blizzard partially walked back the suspension, reducing blitzchung’s punishment to six months, as well as reinstating the e-sports casters (who they initially fired) and giving them a six month suspension as well. However, the company later opted to ban team player-cams from future Hearthstone competitions, as well as post-game interviews. They’ve also been banning players from the Hearthstone forums for expressing support for the Hong Kong protestors.

Basically there’s just a lot of censorship going around regarding anyone supporting the Hong Kong protestors, and they don’t even care that organizations like Access Now have called them out for human rights abuses. In fact, it looks like Blizzard will be standing by their decision to punish anyone publicly supporting human rights and free speech during their live broadcasts.

(Thanks for the news tip AgentBJ09)