Optics are an integral part of any business especially during massive ever growing backlash against a company decision. It is important to very carefully choose your words for anything you utter will be treated to the same standard as the law, can and will be used against you. This careful dance in a minefield is not an art apparently Blizzard is skilled in for while congress watches on they choose to announce they will defend the pride of China on Chinese social media site Weibo. 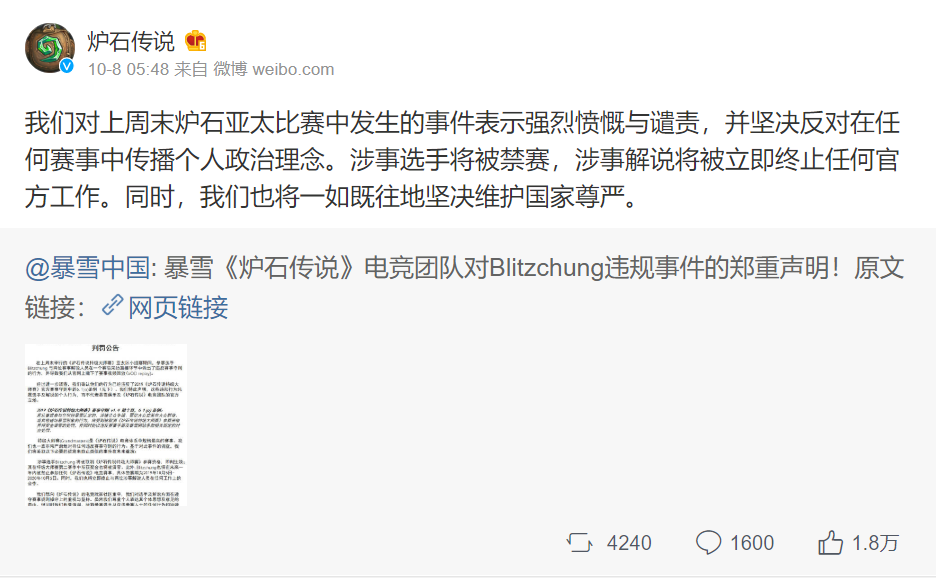 “We would like to express our ‘strong anger and condemnation’ at what happened at the Hearthstone Asia Tournament last weekend. We also strongly object to the spreading of personal political beliefs during any contests. The contestant involved (Blitzchung) will be banned from participating in any contests, and the broadcasters involved will also be immediately stopped from working (under Blizzard). Meanwhile, we will, as always, be determined to defend the pride of the country (China).”

It would appear by Blizzard’s own words that their concern is not with American values and human rights, but solely with pleasing their Chinese audience. This comes at a time when Activision/Blizzard are seeking approval for Call of Duty Mobile, which makes clear the motivations behind their current allegiances. It also shines more light on why in the upcoming Modern Warfare the US military is depicted as War Criminals operating in manners that go against the military’s published Rules of Engagement.

Blizzard shows it is willing to humiliate itself to please the Chinese Communist Party. No American company should censor calls for freedom to make a quick buck. https://t.co/rJBeXUiwYS

Blizzard shows it is willing to humiliate itself to please the Chinese Communist Party. No American company should censor calls for freedom to make a quick buck.

Senator Ron Wyden of Oregon and ranking member of the Senate Finance Committee emphatically condemned Blizzard’s capitulation to the Chinese. He did not provide any further commentary on the issue, but at a time when congress is moving to regulate the video game industry this is not a good look for the industry.