The State of Call of Duty Modern Warfare: Covering up Warcrimes, Missing Features, and Other Issues

One of the chief criticisms from the media and veterans towards the, at the time, upcoming release was how Call of Duty: Modern Warfare depicted the U.S., Military as nothing but war criminals. Developers argued this was the new reality of warfare where the enemy was embedded amongst civilians and how the U.S., military fought its battles. Naturally both Veterans and active duty military personnel were quick to highlight how this was categorically false as these actions were a violation of the rules of engagement military personnel had to follow.

With the “realistic” narrative falling apart it was quietly sidelined to focus on their story involving Special Forces going after an enemy who had come into possession of chemical weapons. How the stakes were so high it could trigger a major war in the region. Activision seemingly appeared to be attempting to distance themselves from the artificial controversy they had generated for the game, but now it has been uncovered Activision has gone so far to white wash America’s actual war crimes pinning them on Russia.

So, uh, it turns out that the new Modern Warfare game just sorta lies about a US war crime and makes it a Russian one because it needs the US forces to be seen as the good guys.

So that’s… I don’t really have words for how to feel right now. Disgusted, probably. pic.twitter.com/8wGRIuYkKk 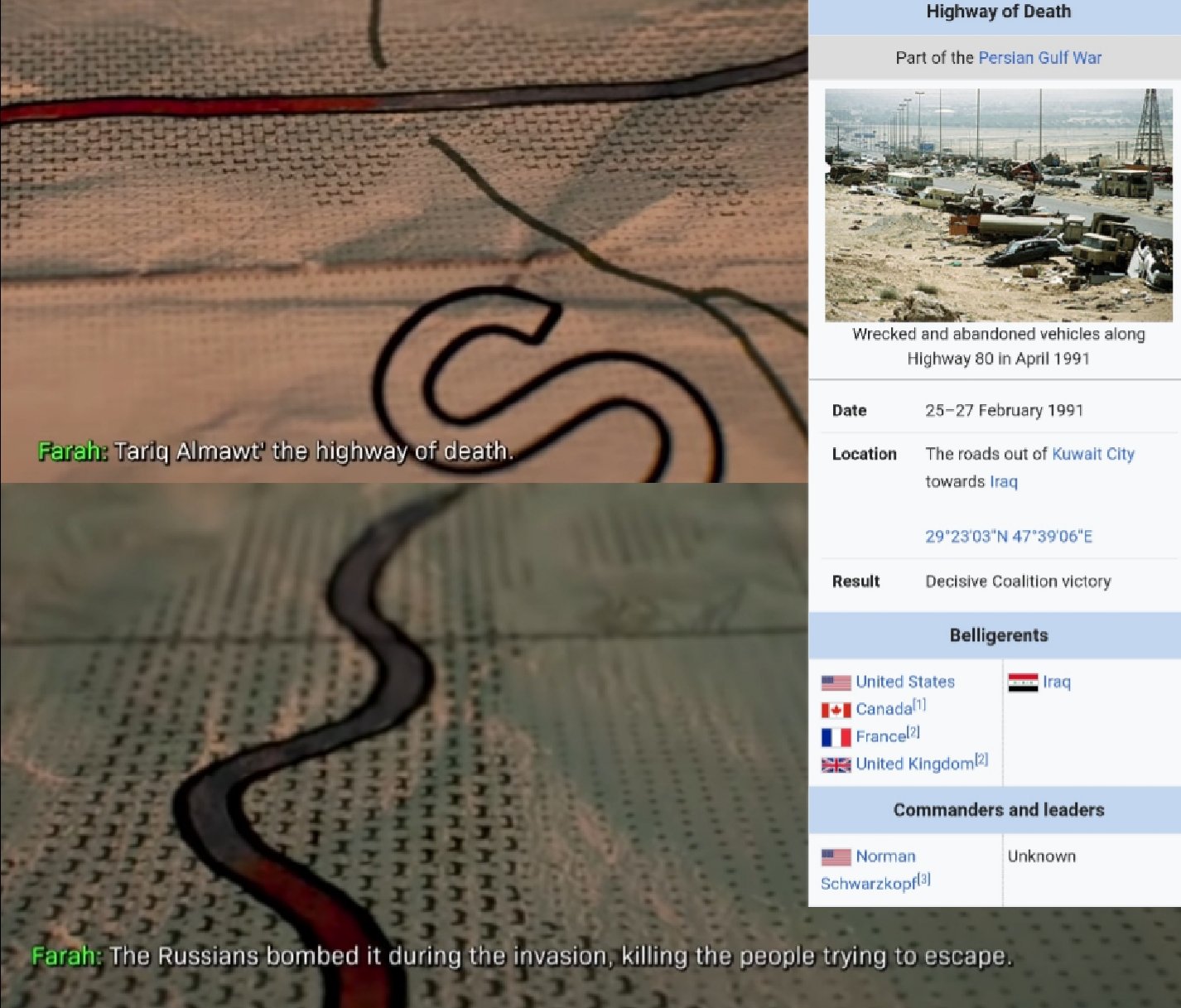 Keep in mind every mission in Modern Warfare is based off a real world incident. A Reddit post on /r/ModernWarfare went into detail highlighting the real life inspiration for every mission confirming the mission referenced above was inspired by the real life incident. Said post despite receiving massive praise from the community was taken down for unspecified reasons.

The short of the actual event was during a retreat with civilians and refugees the Iraqi military was retreating via a six lane highway between Kuwait and Iraq when they came under fire by U.S. Air Force. While the death toll is disputed the damage control was horrendous following the accusations by several international bodies and activists. Over the years all defense boiled down to not a denial they had committed the war crime, but that it wasn’t as bad as people had insisted and they only shot at civilians abandoning the vehicles a few times.

Definitely not one of the better damage control campaigns to ensue following the highly controversial Gulf War. Infinity Ward’s creative license did not end with historical revisionism as it has emerged features promised in the game aren’t actually in the game. Reddit user okaaayheregoes  in a short post on /r/games highlighted the controversy that has been embroidered in the Modern Warfare community.

Missions: Complementing the multi-stage Operations, and also available across all platforms, are additional Missions, which can be played solo or with up to four players. Whereas Operations give you the widest breadth of strategic and tactical choice, Missions are a more curated experience where your proficiency with specific weapons, killstreaks, and other tools will be tested. These Missions are extremely replayable, and you’re able to achieve a 1, 2, or 3-star ranking based on your performance. Naturally, there will be an “Infinity Ward time” that you can attempt to beat! All Operations and Missions content in Special Ops will be available across all platforms at launch and through the post launch Seasons. – Activision Blog

At launch there appears to be only one mission that is reportedly bugged, no star system, and no Infinite War Time for players to beat. Infinity Ward developers responded to the issue over on the Modern Warfare subreddit  promising more missions would be coming shortly.

Inquiries as to when other promised features would be brought online were not met with any responses. Though it appears this is only the beginning of the criticisms against the game.

Other criticisms involve a severe lack of map variety with players constantly reusing the same 4 to 5 maps. The game has launched with 10 standard maps with 4 night variants via standard mode, two large maps for Ground War, and 7 small maps for Gunfight the game’s 2v2 mode. Seemingly that is a lot of maps, but it appears various modes playlists only consist of 4 maps with some users reporting endlessly being dropped onto the same map or not seeing the others.

Fans’ second largest criticism lies with the games skill based matchmaking system. After a short stint with the game the matchmaking system quickly elevates players into an extremely competitive matches. Leaving no room for players to enjoy a causal or more laid back experience, each round requires a player to bring their A game. Multiplayer titles usually solve this conundrum with ranked and standard matchmaking mode. Modern Warfare appears to entirely lack this option and it has to be wondered if this intense match making with no wiggle room originated from a time when weapons were purchasable in lootboxes to drive their purchases.

It hardly is out of the realm of speculation after Activision patented this exact type of matchmaking method back in 2017.  Say I’m going full Alex Jones all you want, but it is suspicious that players are experiencing the exact kind of mechanism that a company has a patent for. It would be like rumors saying I’m developing a weapon to surpass even metal gear which I categorically deny. Then people start noticing a massive walking steam powered spider mech wandering the area. Sure it could be a pure coincidence, but that’s not how it’s going to appear.

Despite these flaws it must be said fans are enjoying the game. Headlines are already celebrating how the game has sold more than Black Ops 4 did on launch so despite these complaints everything is rosy for Activision right? Not so much.

Black Ops 4 was one of the weaker selling titles and only generated $500 million dollars at launch. Sales wise this puts the game as having sold only slightly better than Infinite Warfare which was considered to have underperformed. Anecdotally my local Game Stop was giving way copies with the trade in of two games within weeks of its release. 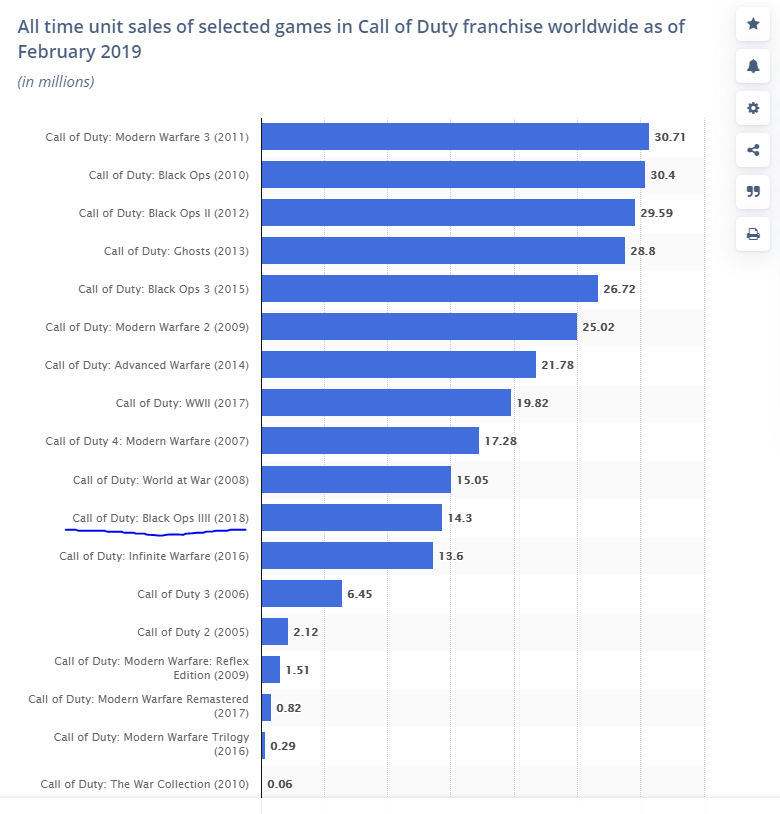 Lifetime sales of Black Ops 4 were only 14 million units showing it sold slightly more than Infinite Warfare over its lifetime. If the highest praise that can be levied against the title is it sold more than a game that required increased monetization because of it’s performance everything for the series may not be looking to bright.

(Thanks for the Tip roflcake)