In a previous article I postulated that Bethesda’s core issues appear to originate with upper management rather than on the employee level. After this latest development with the testers who were banned it goes beyond a reasonable doubt they are the origination of the issues plaguing the company.

Previously the creator of the Fallout 76 map and three of the other members of the datamining crew he worked with searching for exploits to report to the community managers were banned. As a result of how the company treated him in regards to that issues and his refund  to Fallout First membership the map creator undefined7196 took his free community tool down and announced that he was done with the game.

The story was covered recently by YouTuber YongYea.

After the blow up customer support finally got back to the map developer saying they were making an exception to their no refunds policy. Now this didn’t sit well with the map creator as in his own words: the problem is not that I did not receive a refund when requested, it is that no one else is either.

While Australia has been more proactive in reminding companies like Bethesda that consumer protection laws apply to digital goods as well as physical goods, the United States has been less proactive in the field.

Make no mistake legally in the United States there are laws that can be applied to protecting consumers in the realm of digital goods, a complete lack of government enforcement along with the necessary delegation of responsibilities and oversight has created a legal grey zone for these companies to act in. Don’t expect the government to fix the issue any time soon as they’re more interest in regulating the taxation of digital goods  rather than providing consumer protections.

Setting aside the issue of refunds, Bethesda has officially issued a comment on the issue. A comment that amply demonstrates Bethesda’s head has absolutely no idea what its hand and feet are doing.

Naturally undefined7196 took notice of the statement and went on to refute every part of it in a lengthy reply on Reddit. Essentially what he says is Bethesda is misrepresenting his words and that he has not utilized cheat software to cheat in game. He uses cheat engine as it is an efficient tool to data mine files. Keep in mind when deciding who to believe that Bethesda’s own community managers cleared them and tried to explain to customer service what was happening.

During the course of testing the exploit discovered he spent 8 hours adjusting files to produce the result he needed. These are some dedicated testers who were doing this level of work for free. He never kept any of the items he acquired through the testing on his account, but he admits he may have forgotten to drop the items before going to bed and when he got up he was banned for three days so he has been unable to ascertain whether he has the items or not.

Regardless, other users have also called Bethesda out on not stopping actual hackers and exploiters. 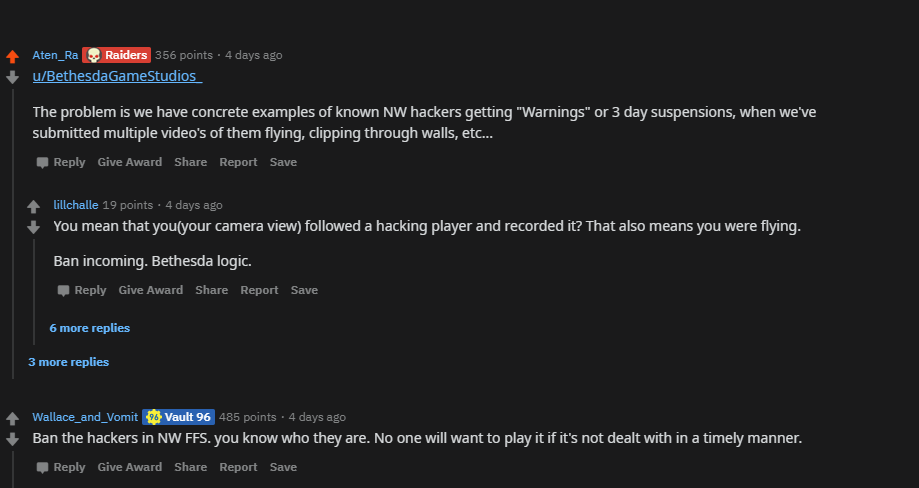 As a final notation the very exploit undefined7196 was banned for was never patched out of the game. Cheaters to this day are still utilizing the same exploit and at worse are only getting a three day ban or even warnings. Meanwhile their dedicated group all received bans on different testing issues and only two of them have even got a response.

We’re at the point where the sheer incompetence of the management at Bethesda cannot be ignored anymore. Any person with  even the most basic business sense understands if you have people doing something for free and your own staff clears them you don’t punish them. When this whole ordeal started management should have immediately stepped in, apologized for not catching wind of the issue sooner and had their accounts personally reinstated with a public apology to their dedicated players who were wrongfully hit with account bans.

To prevent the issue from happening again they could have given them dedicated tester accounts and said “you are only allowed to test exploits on these accounts”.  For their troubles free Fallout First or some atoms, because both are worthless, but make it look like you care. Public image management 101.

Instead their most loyal players are banned and left reeling, realizing Bethesda’s corporate didn’t care in the slightest for their efforts or tools they made.  Their audience that has stuck with the game is left watching how the company doesn’t care about making their experience better and refuses to actually ban hackers! Finally the outside observer watches this and understands they want nothing to do with the company going forward.

A fact that will come to haunt Bethesda as it prepares to launch Starfield which sounds like a science fiction ripoff of Sim Settlements.