After waiting months for word on the status of the Nintendo Switch version of Bloodstained: Ritual of the Night, which launched broken and nearly unplayable, gamers were informed that a patch would arrive in November to address the game’s issues. The patch has finally arrived.

If you own a copy of Bloodstained for the Nintendo Switch, you should have received an update notice for the game, indicating that the patch is available for version 1.03.

Jason “Question” Ryan from 505 Games discussed the differences between version 1.02 and 1.03 over on the Kickstarter page, and 505 Games rolled out a comparison trailer so you can see what the team did to address some of the issues in the game. You can check it out below.

So if you don’t have time to watch, the main issue, the input lag, has been addressed. They state that the delay from the press of a button to the command action taking place on screen has been “eliminated throughout the game”.

This means that you should be able to get 1:1 reaction times down to the millisecond when pressing a button and seeing the reaction on-screen. They say that there are still a few areas that they would like to optimize in version 1.04, so be on the look out for that during your playthrough. 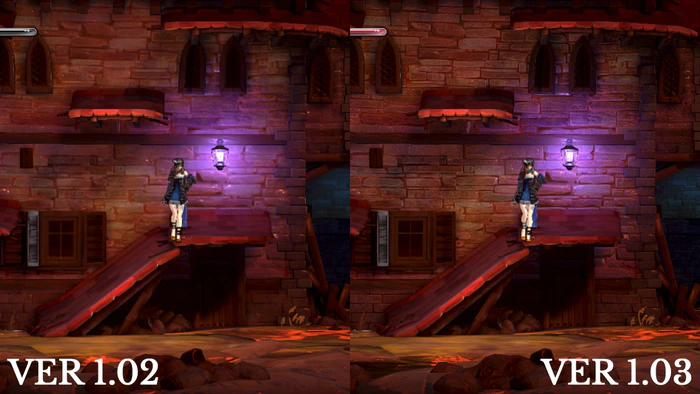 The game crashes have been reduced, and load times have been cut down by up to 70%. They’re still optimizing the game on a room-by-room basis, and so there’s still room for improvement for version 1.04, but at least the game is now playable.

They also apologized for delaying the “Iga’s Back Pack” DLC, and noted that the Xbox One update is still a ways off.

I’m sure most fans are just happy that the Nintendo Switch version is finally playable, and that the team put the performance and optimization first ahead of milking the fans of DLC.