Word has come from a poorly constructed hit piece in Newsweek that payment processor Paypal is not taking steps to remove Stefan Molyneux from their service. Following an orchestrated campaign of targeted harassment the host of Free Domain Radio will soon have vague steps happen that will result in him no longer being able to accept donations through Paypal, however.

Nandini Jammi the organizer of the campaign reached out to Right Wing Watch to signal her virtue in deplatforming the “Nazis”. As a typical leftist she is not able to grasp the Nazi movement was a Germanic movement that focused on the uplifting of the German people, not whites as a whole, she nevertheless proceeded to defame Molyneux as a white nationalist until Paypal agreed to remove him.

If you have a moment, pls report this to PayPal’s @kim_eichorn – ask why A WHITE NATIONALIST is so welcome at PayPal👇🏽👇🏽👇🏽:

Make no mistake her motivations are fairly clear that she intended to silence him through financial terrorism. By targeting his primary source of income her hopes are that he will no longer be able to continue to operate. Rather than debate him with counter words and facts, her and both publications have taken to insinuations, accusations, and fabrications to justify their attempt to ruin his life.

According to Jared Holt from Right Wing Watch (whose favorite word is White Nationalist), he wrote…

“Now that he’s been booted from PayPal, I think he’s going to find himself bouncing around between payment processors,” Jammi added. “No one’s going to want to touch him.” 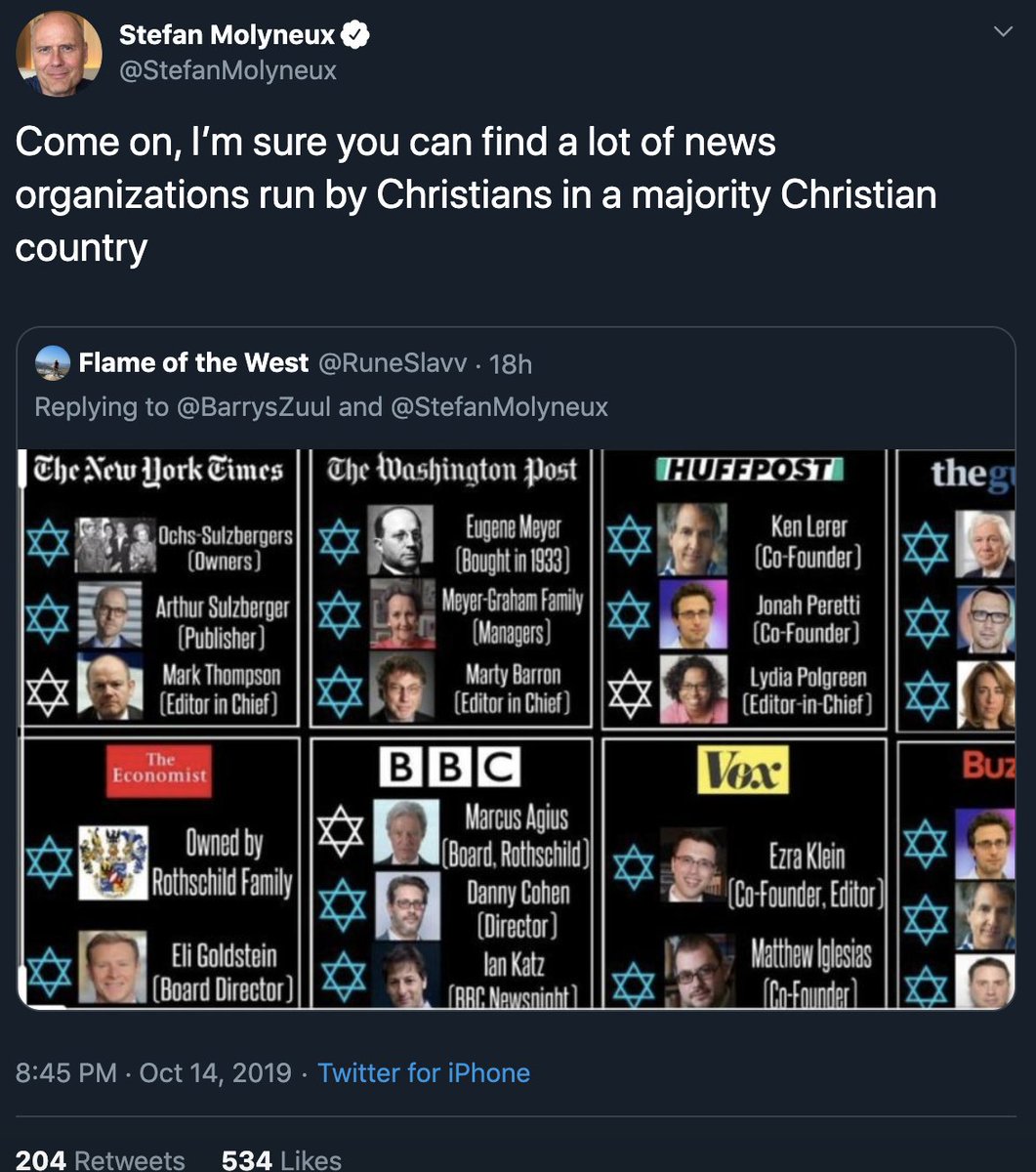 Pointing out the religious orientation of the executives who run the media companies is not anti-Semitism. Unless of course Right Wing Watch and Ms. Jammi mean to imply that these people are intentionally colluding in some nefarious machination, which if exposed would put these individuals’ lives at risk? Or that they are in some way subhuman life forms that need to hide in the shadows as they undermine society? For unless they are making this implication the mere action of pointing out Christians are not making content for Christians is far from malicious.

Given the Left’s repeated bias against Israel and Jews, including their suppression of black on Jewish crime, as reported by the Daily Wire, because of it’s problematic to their narrative, or Democrats’ anti-Israeli stance that became such a problem Congress needed to hold a vote condemning anti Seminism displayed by their party, it is outright hypocritical for them to feign outrage over an imagined attack on the Jewish people.

Now suddenly we’re supposed to believe the supporters of Representative Omar are suddenly outraged at imagined anti-Semitism? Or is it more likely that this is another brigading by the cancel culture from the Left who cannot compete on an intellectual level, so they instead opt to remove their competition rather than have them expose their lack of capacity to present a valid point?

Even now they’re celebrating removing one of the more moderate voices in their “Alt-Right” label. If Molyneux, who was a firm believer in discussion over actions such as cancel culture, disappears they essentially prove him right. That ultimately there is no peaceful dialog to be had with the Left in this country anymore and that while it may not be violence, action certainly must be taken for nothing else than self preservation.

Is it no wonder then over 60% of Americans, according to a Georgetown University poll, believe this country is heading towards a civil war? All so the self righteous dictators of all that is socially just can feel morally superior for another day. A problem that has reached such magnitudes that the Left and other races are calling the white progressives out on it.