Protocol Games and Raiser Games released Song of Horror on the Steam store for PC gamers back on October 31st, 2019. The third-person, fixed-camera Lovecraftian horror title will probably make its way to home consoles such as the PS4 or Xbox One in the near future, but for now PC gamers are the only ones with access to the title. For those of you looking for a little help in completing the puzzles and avoiding certain dangers, there’s a walkthrough available.

YouTuber CJUGames covers the entire first episode of Song of Horror, which you can check out below.

The game starts with a cinematic featuring a music box that opens with some tentacles coming out of a black mist before it’s closed shut.

You start with the British character, Daniel Noyer.

You can play the game with a keyboard and mouse or with a controller.

The mechanics are similar to the old Resident Evil games with the sluggish tank controls and fixed cameras. 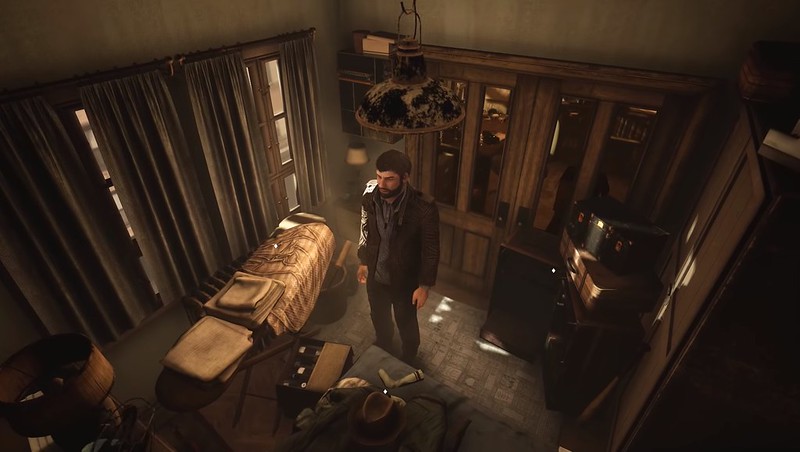 Examine the apartment, and go into Daniel’s bedroom. When you exit the bedroom you’ll receive a phone call. Pick up the phone and a short cinematic will play revealing that Sebastian Husher has gone missing.

Once the cinematic ends you end up at Husher’s house.

If you’re playing with a controller, the left trigger is to run while the left bumper is to open the inventory. The right trigger is to activate the character’s light source.

The light source doesn’t run out of batteries/fuel so you can keep them on for as long as you need.

When you get finished examining the outside garden, head through the front door and you can further examine Husher’s foyer and hall.

Go into the room at the far end of the hall on the right to examine the living room. There’s another room to the right of the sitting room’s entrance that leads to the dining room.

There’s a note on the door. Read it. 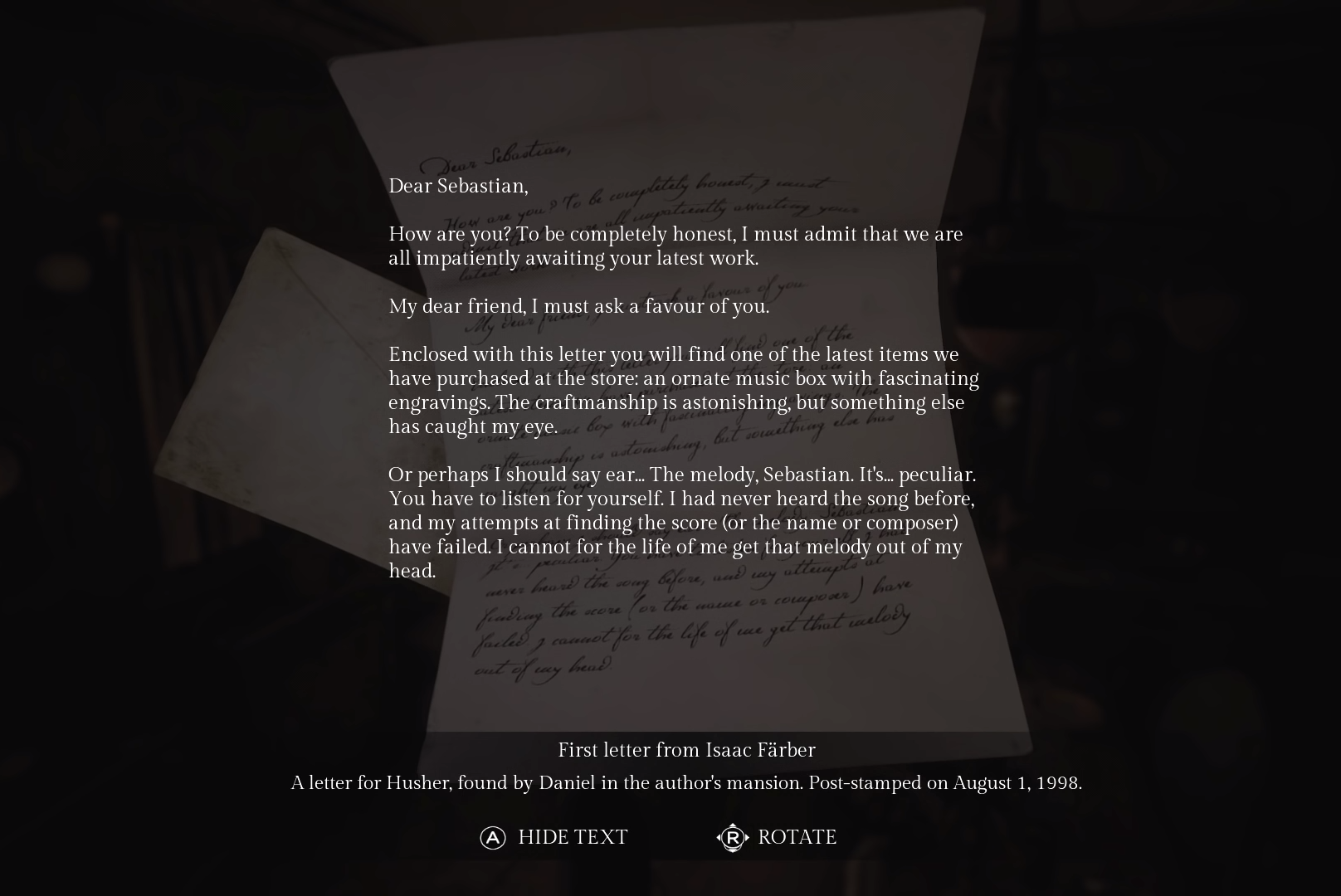 When you get done reading the note, go through the door that leads into the study and there’s a second door with black ooze around the edges.

Another cinematic will play.

The game will then allow you to play as four other characters, including Sophie van Denend, Daniel’s ex-wife; Etienne the liaison for the publisher of Husher; Alexander, the caretaker of Husher’s place, and some Mexican chick named Alina Ramos.

Keep in mind that this game has permadeath.

If you screw up and die… that’s it, the character will die.

Be sure to listen to the doors before entering into them because if you hear anything on the other side, DO NOT go into the room. 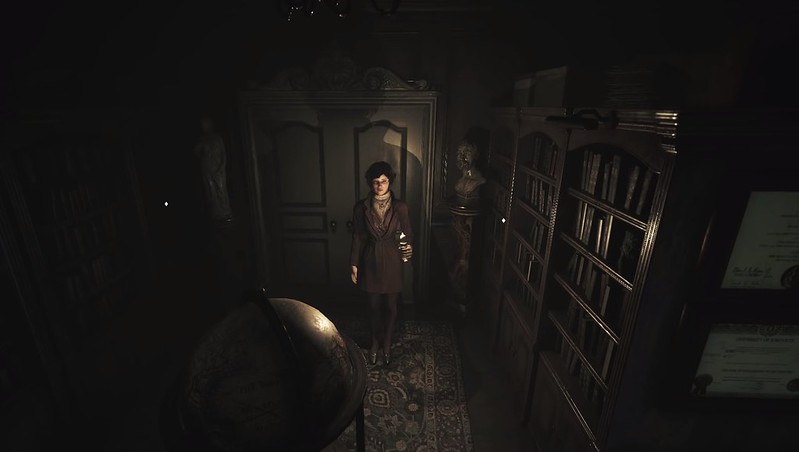 In the walkthrough above he goes with Sophie, Daniel’s ex-wife. She’s wearing a mini-skirt with tights and a jacket that comes above the thigh, so you get to see plenty of her shapely legs.

Once you get inside the house you can examine each of the rooms.

The second room off the main hall will lead you into the garage where there’s a locked metal box along with a scented candle you can take from the work bench.

Back in the main hall, there’s a note on the desk that reveals there’s a key in the top drawer of the library.

Head through the living room to the library and if you go around the bend to the desk, the top drawer reveals a key resting inside.

However, you’ll need to lubricate the top drawer to open it fully.

Exit the library, go into the dining room off the living room, and head through the door at the end of the dining room that leads into a small hall with a nightstand in the corner. There’s a box of matches. Take them.

The small hall also leads to the kitchen, there’s a ring on the table. Take it.

There’s a drawing on the refrigerator by Husher’s youngest son, Saul.

Go into the storage room off the kitchen and there’s a can of oil on the counter at the end of the room. 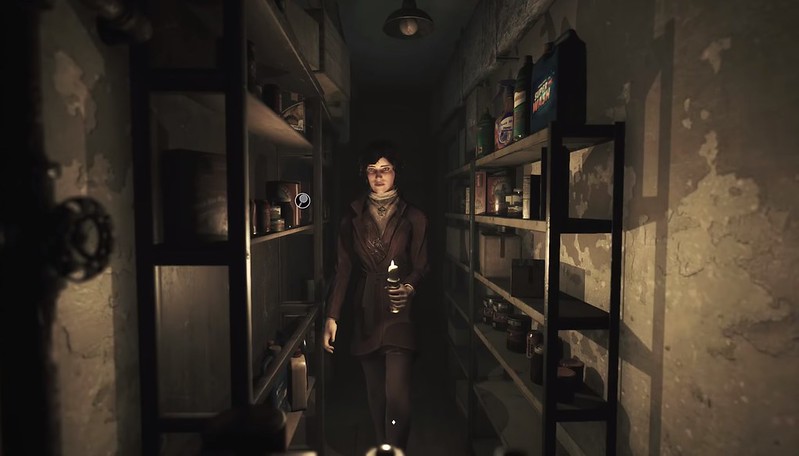 When you exit the storage room you’ll gain access to the map and the ability to listen to doors.

You can listen to doors by pressing ‘Y’ on the Xbox One controller or Triangle on the PS4 DualShock.

Additionally, pressing in the left thumbstick will activate the map of the house.

Exit the kitchen and make your way back into the library and use the can of oil on the top drawer of the desk by pressing ‘X’ on the Xbox Controller or Square on the DualShock 4.

When you exit the study some monsters will try to burst through the door fro the kitchen. A short mini-game will commence where you have to push the monsters back by keeping the door closed.

Exit the dining room and make your way upstairs. If you go into the locked bedroom by using the master key, the darkness will be in the master bedroom. Before you can go in there you’ll need to turn on the power.

Exit the room and go into the bathroom and take the dish towel. 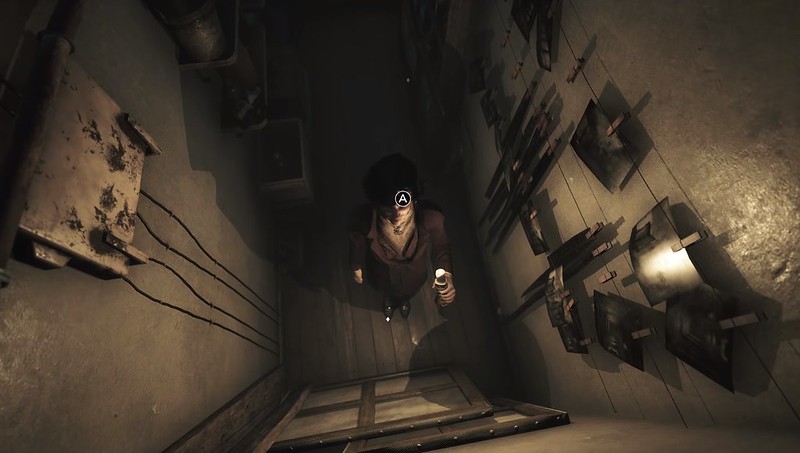 There’s an attic at the end of the hall to the right, but you’ll need an item to open the attic door through the paint storage.

You can also exit the top floor onto the balcony.

There are some grill tongs that you can gather from the barbecue grill.

Exit the balcony and head left and there’s a remote control for the garage on a tea table in the corner of the hall.

Go back the other way down the hall from the balcony to the right and there’s another room you can enter that has a to-do list on the table. Take it.

Head back downstairs and go into the kitchen and use the dirty dish cloth to clean up the puddle on the kitchen floor.

Go into the door at the other end of the kitchen and there’s some firewood in a bowl you can take. You can place the firewood into the fireplace inside the library. However, you will need an accelerant to light the fire.

First head back to the hall that leads to the garage. 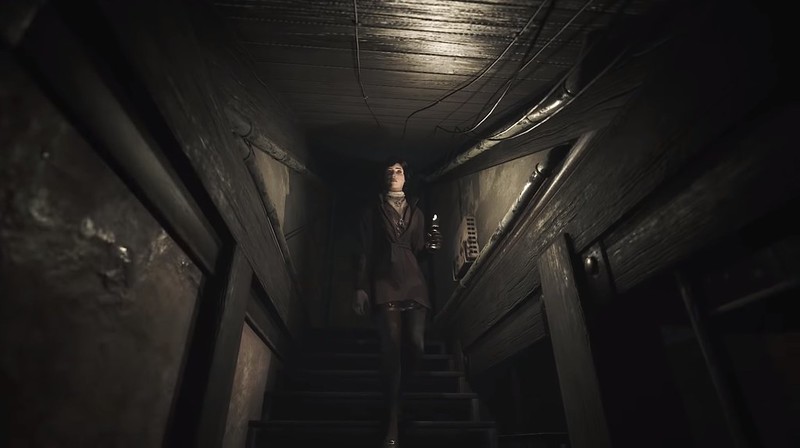 Use the master key to open the basement door and head downstairs.

There’s a note that will help you to open the safe on the crate. The code to the safe is: 4798

There’s also a fuse box at the end of the basement that requires you to complete a puzzle to turn the lights on. 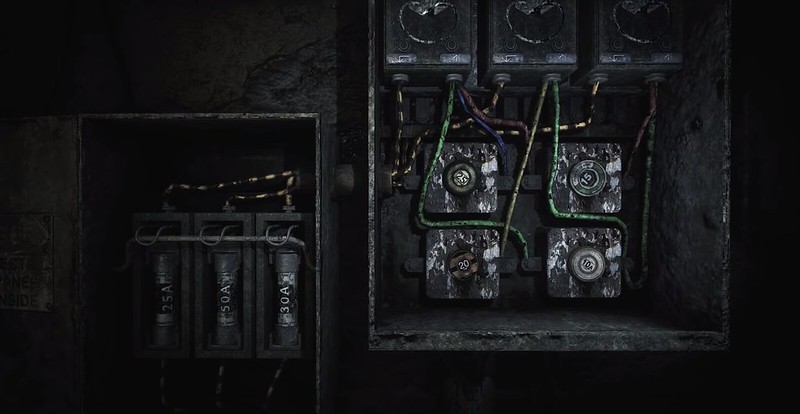 When the lights turn back on, head back to the garage, hold down the blue button on the generator for three seconds until it resets. Use the garage remote control to open the garage door.

Go to the front of the car and take the jumper cables.

You can also take the blue Haiku Folder 2 from the back seat of the car.

Head back inside and go upstairs and turn on the light to the bedroom to purge the darkness.

Go inside the room and take the doll on the bed.

Exit the room and the darkness will chase Sophie into the play room.

Hide in the wardrobe.

Follow the rhythm of Sophie’s heart by tapping the left and right trigger to the beat of the heart. Keep tapping the buttons until the darkness goes away.

Turn on the light and aim it at the black goo on the door. 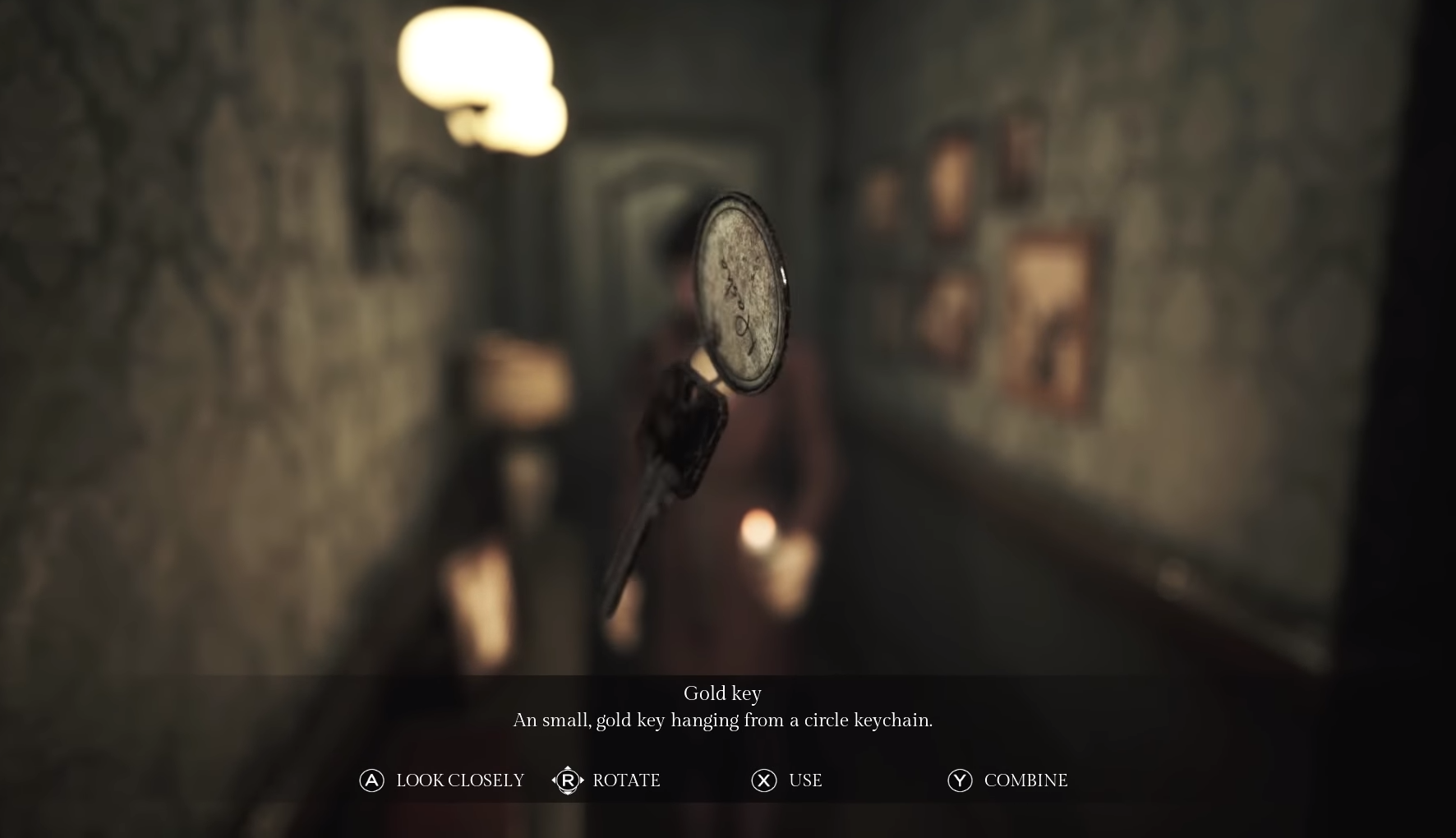 Go inside the room and take the key with “Masha” on it.

Go into Julia’s room and there’s a tape recorder.

There’s some super glue on the desk in the corner of the room.

Take the glue and combine it with the broken key ring in your inventory.

Exit Julia’s room and go into the bathroom. Use the grill tongs on the toilet to fish out the dirty old rag doll from the poop-filled toilet.

Go into the paint storage room that leads to the attic and use the hook to go into the attic. The oval painting is there with the other two numbers you’ll need to open the safe in the basement to acquire the doll inside.

While in the attic you’ll hear crying. Go over to the little girl and she’ll give you the remaining Haiku from Husher to complete the set, and then she’ll disappear. 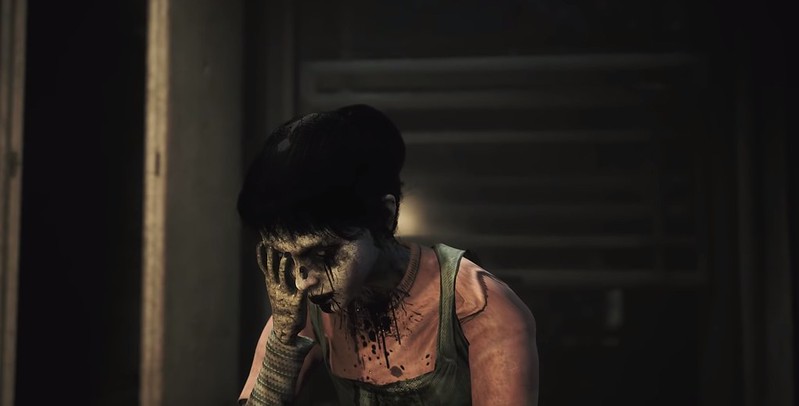 Exit through the window and head down the ladder to the next level.
R
Proceed through the door into the master bedroom.

There’s a note on the nightstand by the bed.

You’ll find a blue rag doll in the master bedroom on the bombe-shaped dresser in front of the vanity mirror.

Proceed into the bathroom and read the letter.

Exit the master bedroom. A bird will smack through the window and die on the floor.

Head downstairs, go outside through the garage, and use Masha’s key on the servant’s quarters.

The door at the bottom of the hall leads into a laundry room where you’ll find some paint thinner. Take it.

Go into Masha’s sewing room and you’ll find the orange rag doll on the ironing board near the old metal fan. You can also read the note from Masha.

Go back upstairs into the play room and you’ll need to place the five dolls into each room. 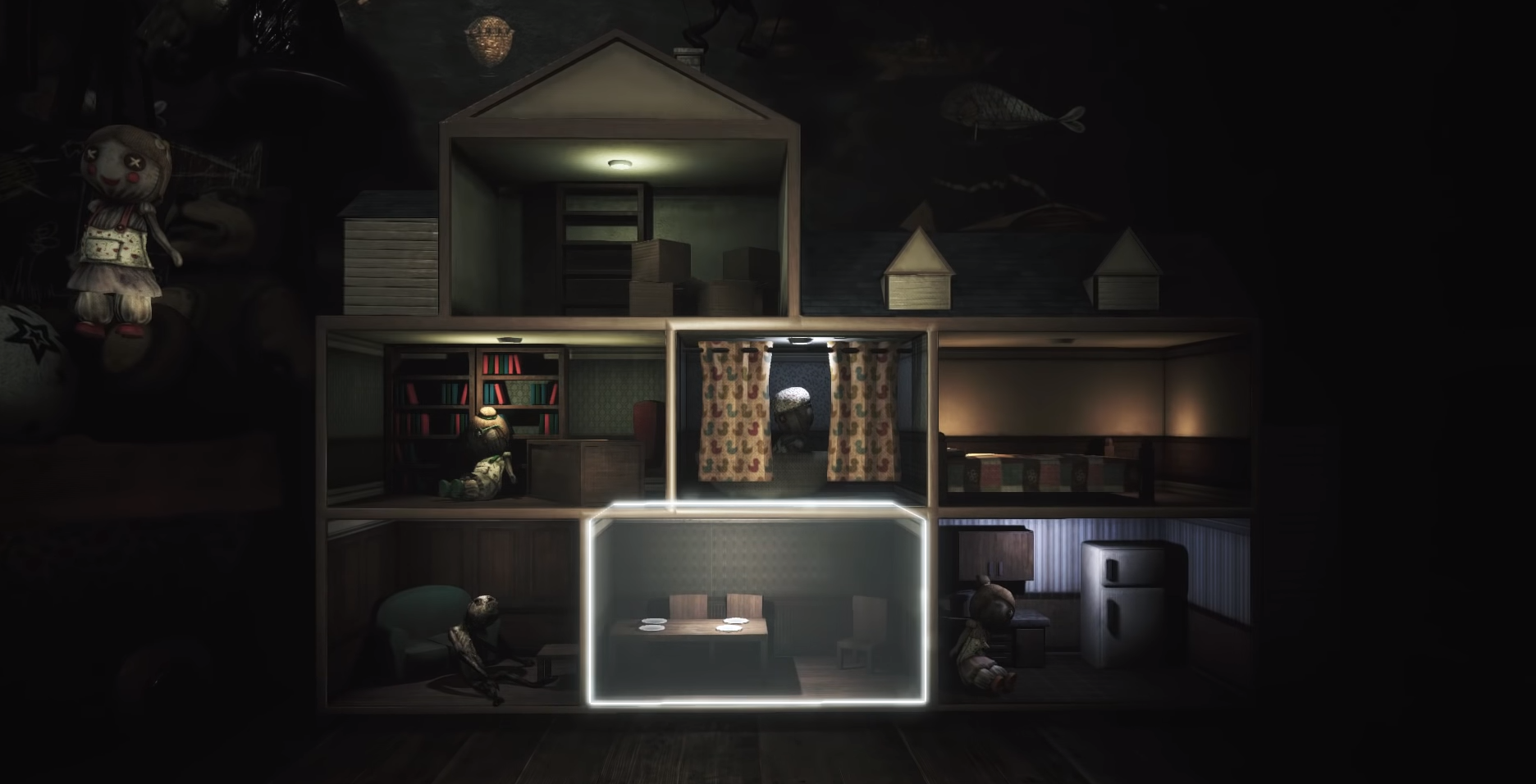 You’ll need to place the shower cap doll in the bathroom. Place the doll with the glasses in the library.Place the ugly doll in the first room at the bottom left hand corner of the doll house.

This will open up a hidden room by the ugly doll.

Head into the dining room and there’s a decrepit corpse sitting at the table.

Take the piece of paper next to the corpse.

Head into the kitchen and there’s another corpse hanging on the wall with another piece of paper on the body. Take the paper.

Head upstairs to the study and there’s another piece of paper on a corpse.

Head into the master bathroom and there’s another piece of paper on the corpse. 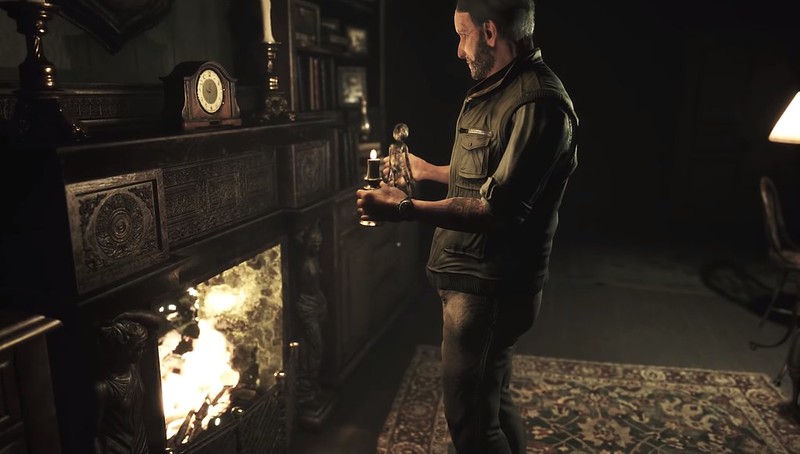 Go back into the play room and take the ugly doll from the first room and head back downstairs to the living room and throw the doll into the fireplace.

Go through the door in the dining room where the sinister force used to be and use the old key on the door to go down into “Elsewhere”.

Follow the hallway to the end where there’s a door. Inside you’ll find Daniel, in which a cinematic will play to end Episode 1.