A new report from Evolve PR called the E3 2019 Media Study has revealed that media presence at the event has been subsiding, and even more than that the amount of coverage they’ve been producing has been shrinking… significantly.

GamesIndustry.biz picked out some revelant parts from the the Evolve PR report, and it indicates that big media presence and coverage of non-AAA titles are all on the decline with each passing year at the annual E3 event held in Los Angeles, California.

Evolve sampled 10% of the traditional media and 10% of new-gen influences (such as streamers and video content producers) to gauge what they were covering and how at each E3 event. They’ve been sampling the changes since 2016, and it hasn’t bee looking good. As noted by GamesIndustry.biz, media attendance has steadily been shrinking over the years:

Matt Broitman, Evolve’s client support and research coordinator, hypothesized in the report why the drop is taking place, writing…

“There are a number of factors that could lead to this drop. For instance, we do know that a large number of outlets have shut down in the last two years, which would account for some of the decrease. We also re-classed podcasts into the Influencer sample rather than the Traditional Media sample with this round of study, which would impact the numbers slightly as well.

“That said, even taking those things into consideration, the cold fact remains that a much smaller number of relevant outlets attended E3 this year as compared to 2017, which of course resulted in less coverage overall.”

Or – and just just hear me out – maybe media companies are going woke, going broke, and having fewer journalists and reporters to send each year because they don’t actually service gamers? Keep in mind that Variety laid off their games staff once E3 concluded.

A lot of attendees are now made up of the general public instead of press, so the crowded show floors are more-so consumers than those reporting on what’s being consumed, as depicted in the video of the event by YouTuber Becca Von.

So each year we’re seeing this dwindling of media presence likely due to the fact that the big media boys are dying.

Instead of catering toward the interests of gamers, they’re focused on pushing agendas, forcing fake news down everyone’s throat, and generally making people angry and dissatisfied with both the media coverage and the items being covered.

Speaking of which, GamesIndustry.biz reported that fewer and fewer games are getting coverage from the show floor…

“In total, Evolve’s traditional media sample produced 1217 pieces of first-hand, show floor coverage — on average, 4.2 more articles per outlet than in 2017, but also 40% less total articles than in 2017. Previews were down roughly 5% from 2017, while interviews were up roughly 5%. And of 240 games covered in total, about 40% only saw a single article or mention within the two weeks following E3.”

[Correction:] Originally the article stated that 60% of the games went unnoticed, but the report actually shows that while only 40% received a single article, 33.6% of the games did receive between two and five articles coming out of the event. Only 4% received between 16 and 20 article mentions, as depicted in the pie chart below. 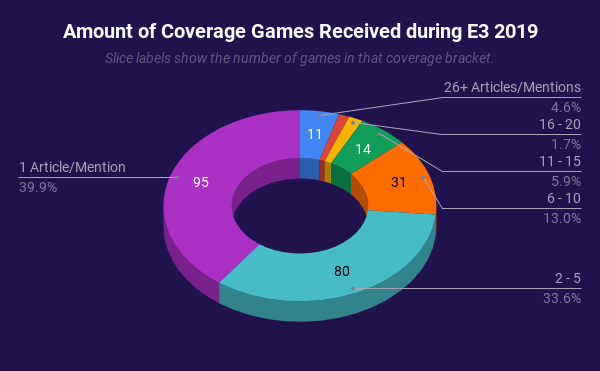 Now sometimes some games have interview embargoes to coincide with announcements or reveals taking place months after E3 concludes. It’s not uncommon to have interviews surface a month or two (or three) later when a more formal reveal is made and there’s less of a fight for a slice of time during the crowded show floor experience.

However, even with that caveat taken into consideration, Evolve PR noted that there were still declines in coverage of indie titles…

“The pool of first-hand coverage that came out of E3 this year has shrunk comparatively, and what remained went even further to those big names, leaving smaller titles high and dry. This results in E3 having lost its identity and failing to excel in any given category; it’s too expensive to be a public focused show like PAX, too crowded and public to be an industry-focused event like GDC or DICE, and too broad and loud to generate the undivided attention that larger-scale in-house efforts like a Nintendo Direct or even a basic press tour can produce.”

I, too, noticed that there was far fewer coverage of interesting or non-AAA games coming out of this year’s E3 by those that attended the event.

It was difficult finding original coverage for original games, either due to YouTube’s algorithms focusing more on putting selected sources above others, or due to the dearth of actual on-the-floor reportage from the media outlets in attendance.

In any case, it makes the gaming industry look like it’s shrinking more than growing, but if it means less propagandists, less agenda-driven drivel, and fewer activists posing as journalists, perhaps then that’s for the best?