Anytime anyone criticizes one of the major gaming platform holders, expect lots of pushback and lots of dismissals. However, the rule of thumb is that the numbers don’t lie, and that’s exactly what Overlord Gaming provided in a new video comparing the frame-rate performance between Steam games using Denuvo and games purchased from the Windows Store running on Windows 10.

YouTuber Raging Golden Eagle caught wind of the video, which was published on December 19th, 2019, and shared the video on Twitter.

WHAT THE HELL Microsoft? As bad as Soyny is fucking up all you had to do is not fuck up and you had the next generation in the bag… But I guess you can’t manage that huh? https://t.co/d5juTzHgeC via @YouTube

The video on Overlord Gaming is titled “A DRM Worse Than Denuvo”, and it spends nearly 15 minutes breaking down exactly why that is.

This isn’t some pointless rant or a meandering hit-piece, it’s a factual, numbers-based comparison that identifies some serious performance issues that hinder the experience of games purchased from the Windows Store for Windows 10, either running throught he Xbox app or the Universal Windows Platform.

As pointed out in the video, four scenes have cracked Denuvo games, but only Codex have cracked games from the Microsoft Store for Windows 10.

However, even after cracking Forza Horizon 3, a post-launch patch rendered the cracked version obsolete.

Overlord Gaming points out that even basic things like installing games is restrictive when purchasing from the Microsoft Store. You can choose the drive but not the folder.

There are lots of gigabytes taken up but you can’t readily decipher what the files are. This also prevents modding and file tampering, much like the closed ecosystem of a home console.

They also tested a number of games between Steam and Windows, and the results were not good… for Windows 10.
Prey, which ran worse on the Universal Windows Platform despite the fact that that version doesn’t use Denuvo, performed much better on Steam even with Denuvo active. In fact, there was a 77 frames per second difference in the Denuvo version’s favor compared to the Windows Store version when measuring the minimum FPS between the two PC software platforms. 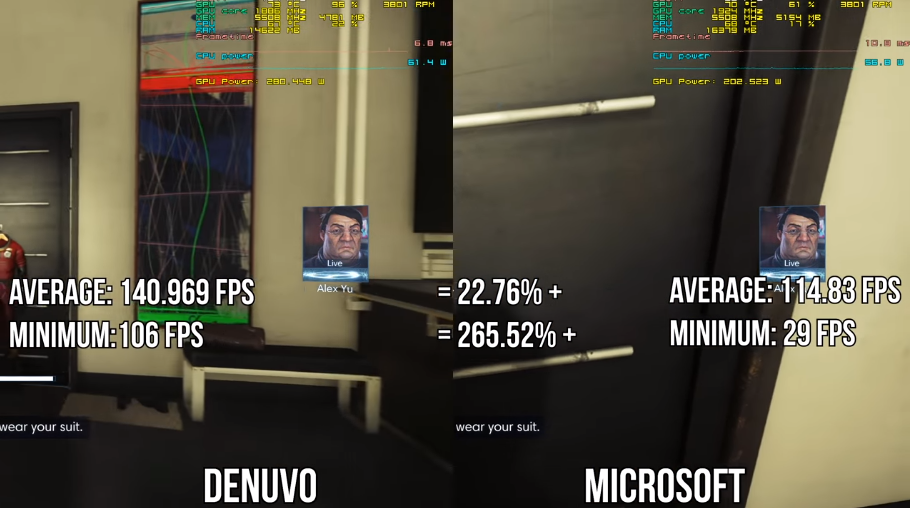 They also tested Rise of the Tomb Raider, Gears 5 and Middle-Earth: Shadow of War. With the exception of a few fringe comparisons, the UWP (or Xbox Game Pass versions) of the games performed worse than the Steam version, even with the Steam version running Denuvo.

On average, the cumulative results showed that there was an 18.62% performance advantage in Steam’s favor running on the same hardware compared to the UWP version of the games running from the Microsoft Store.

The games also, on average, had a 6.93% higher frame-rate lead on the games running on the Xbox app, or from the Windows Store.

Now I’m sure some critics will claim “But did he have Windows 10 set to gaming mode?” and other such excuses, but it still doesn’t change the fact that overall performance in apples-to-apples comparisons showed significant reduction in frame-rates, as well as the fact that the Windows Store games (or those from Game Pass via the Xbox app) are anti-modding and don’t even allow you to modify or change the game files. So there’s no way to improve the game on a community level.

Why anyone would defend this kind of draconian DRM that – according to Overlord Gaming – is worse than the Epic Games Store is far beyond me.

No comments yet Categories: Interesting Content, News, PC, Videos Tags: Denuvo, DRM, Industry News, Microsoft, PC, Steam, WIndows 10
← Germany Seeks Legislation To Retrieve ISP Data, Passwords For “Hate Speech”
Ubisoft Has Over 15 Projects In Development, But One Of Them Has Been Canceled →