[Update:] According to TheQuartering, he believes that the Sausage Roll article may be fake news. It’s not verified if it’s entirely true or not, but it’s one of those things where it’s best to exercise caution. Right now there’s no definitive proof that the story is fake (unless Marvel or DeConnick come out and say it’s fake) and there’s no definitive proof that it’s true (until additional sources verify the claim). So in today’s fake news-operated atmosphere, take it with a grain of salt.

[Original article:] There are Centrists™ out there still to this day willing to defend Captain Marvel, claiming that the movie isn’t that bad and that Brie Larson is a “queen” that “slays”, whatever that millennial jargon means. However, for normal people who have a modicum of common sense when it comes to media entertainment, they will rightfully tell you that Captain Marvel sucked dangling donkey balls. Well, it’s about to get worse, because the writer for Captain Marvel 2 is a proud feminist, a pro-Iranian, anti-Trump, and supported Anita Sarkeesian while standing against pro-consumer revolts such as #GamerGate and #ComicsGate.

Australian outfit Sausage Roll did a spotlight on writer Kelly Sue DeConnick, where they opened the story with the following paragraph…

This is the sort of thing that you would think would be used in a meme mocking the kind of writers that Marvel would hire for their Phase 4 movies in an imageboard, but the fact that this is real makes it all the more disheartening.

And even more than that? It gets worse.

Back in 2016 DeConnick penned a piece for The New York Times titled “Why Donald Trump Should Not Be President”, regurgitating all the typical talking points of someone who suffers from Trump Derangement Syndrome.

Why Donald Trump Should Not Be President https://t.co/ZFcJ9kjEDh

DeConnick also reportedly has a history in antagonizing comic book fans and gamers by siding against them in the great Culture Wars of the current epoch.

“Kelly Sue was also a prominent figurehead in the GamerGate, and the less heard of ComicsGate, movement who worked tirelessly along side Anita Sarkeesian to eradicate toxic masculinity from a male dominated videogame and comic book culture.”

I thought that the whole article may have been satire, but one look at her Twitter account and it’s nothing short of a carbon-based horror-story unfolding in real-time through the debilitating digital dungeon known as social media.

There’s a lengthy thread that DeConnick posted about taking her kids to Disney Land on December 29th, 2019, and it’s basically a cornucopia of cringe-inducing embarrassment.

Those are my shoes, btw. Nobody call CPS please.

So we are off to #Disneyland with an 8 year old and 9 year old in full faces of make up. pic.twitter.com/bsT9NxdvPa

You know what the real tragedy is? I have no idea which ones are the boys/girls in the family and I’m too old, too tired, and too disconcerted to bother trying to figure it out.

By the way, this is America’s Left.

A canvas of distorted and indistinguishable images that reap nothing but feelings of disappointment and disgust; a tapestry of degeneracy.

What’s more? This is the person who will be responsible for penning Captain Marvel 2.

And if you’re stupid enough to think that the “artist” will be separating themselves from the work, Sausage Roll makes it clear that DeConnick will be putting plenty of her own politics into Captain Marvel 2, explaining…

“Kelly Sue promises fans that Captain Marvel 2 will be the definitive female superhero flick and will bring light to the injustices that women working in geek culture suffer on a daily basis.”

I attempted to reach out to ask if DeConnick was really intent on including themes in Captain Marvel 2 that have culturally been borne out of misandry, but she has me blocked on Twitter. 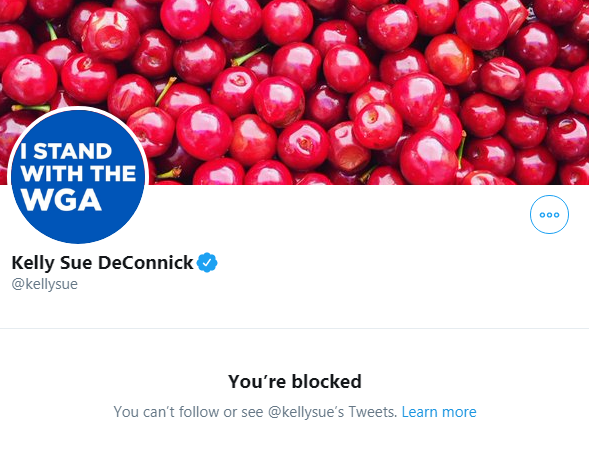