New alpha footage has emerged for the upcoming pirate themed action game being build on the Unreal Engine 4. The video is only three minutes long but it gives gamers a small taste of the pre-alpha version of the upcoming title.

Black Sun Games recently released the teaser trailer for Corsairs: Black Spot to close out 2019 and usher in 2020. The teaser prefaces its content with a quick clip showcasing that the game is making use of photogrammetry for characters and objects, as well as motion-captured animations to help bring the combat and cinematics to life.

The video of the in-game play opens with a cinematic of a captain whipping a crew mate. From a distance some pirates take aim at the ship, and then we finally see what the actual gameplay is like. Yopu can check it out below.

Gameplay consists of isometric play, and as you engage, there are interspersed cinematics showing the destruction of the ship and melee combat. I do wonder how invasive those sequences will be in the actual game or if they were lengthy during the pre-alpha teaser just to give gamers an idea of what to expect?

While I’m not all thrilled about the possibility of constantly being interrupted during combat, I do like one of the other features of the game: physics-based destruction. 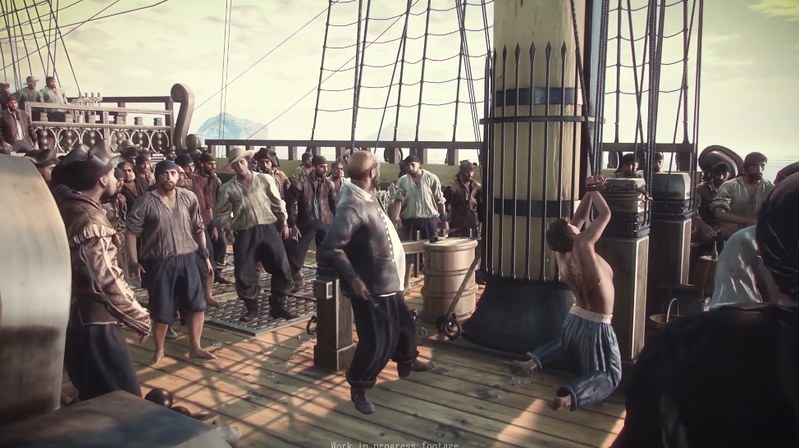 I feel like physical implications and detriments due to collisions, impacts, or crashes have been highly underutilized during this generation. One thing we see before the teaser clicks over to the cinematics is that when the one ship being attacked collides with the pointed rocks sticking just above the surface of the sea level, it scrapes and cracks the ship, splintering wood and sending pieces of the boat flying everywhere.

It would be nice if we saw more of that in more games. But alas, too many studios are stuck trying to stay safe with cookie-cutter designs and completely forgettable mechanics.

We’ll see how this all plays out when more information becomes available for Corsairs: Black Spot. For now you can follow the development of the game, which is due out for Xbox One, PS4, and PC, by subscribing to the YouTube channel.