Last E3 during Microsoft’s conference From Software unveiled their next game was being made in collaboration with George R. R. Martin, and it would see a return to their classic formula. Despite delivering a few interviews on the nature of Elden Ring there has been no release window provided.

That was until From Software sent out New Years Eve cards that accidentally contained the release window for the upcoming title. Comicbook.com reports the card stipulates that the release window will be in June of 2020 during the typical summer drought. 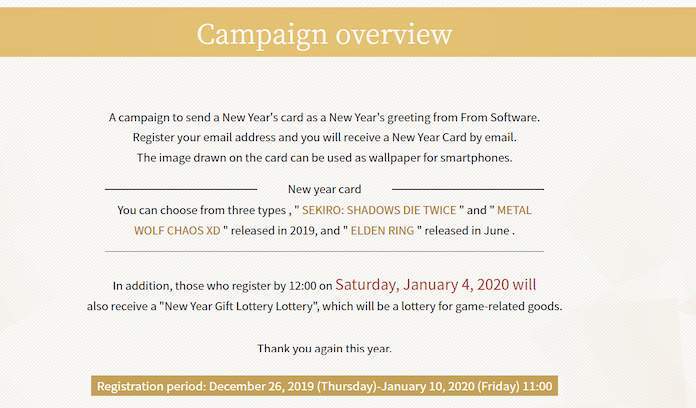 Given this is not an official announcement it should go without saying that this is not an official release date. That aside the development of Elden Ring can be traced back to 2016 when From Software announced they had three projects in development. With the third game now known to be Shadows Die Twice; the first game set in a dark fantasy world that is akin to Dark Souls is obviously Elden Ring. The second game was confirmed to be a new Armored Core game, so it’s safe to say unless mechs are laying a massive smack down on some souls like fools Elden Ring is probably not that project. Even though that sounds incredibly awesome.

What we know about it

With the release potentially half a year away it is startling how much yet little we know about Elden Ring. First and foremost it is known that the world and lore of Elden Ring will be shaped by George R. R. Martin rather than series creator Miyazaki.

Aside from the marketing boon such collaboration brings to the table it frees Miyazaki to focus on development rather than writing. All the time in the world will be needed as Miyazaki in an interview with IGN explains how this game will feature vastly larger and more open world design.

During the interview there are hints that the world state will affect how combat plays out offering players more opportunities or different challenges. This won’t be the first time From Software has attempted to implement a system where the world state effects not just combat but level design as well.

Dark Souls 3 was to originally feature such a feature involving various ways to affix a locations state. Originally this would play into how the game ended, so it is likely a similar system will make its way into Elden Ring.

Combat and general gameplay are described as being souls like. You’ll probably collect some form of experience from defeating enemies with typical souls combat system that is similar to prior incarnations.

Concluding the interview Miyazaki explains how there won’t be villages handing out quests like other open world games. That simply isn’t their strong suit and after each launch has been plagued with frame rate issues it is probably for the best that Elden Ring’s development to focus on smoothing out rendering a larger world.

“Creating a new type of game is a big challenge for us. If we would add towns on top of that, it would become a bit too much, so we decided to create an open world style game focused on what we are best at.”