[Disclosure: A preview copy was provided by the developer]

Graywalkers: Purgatory is a turned based tactical strategy game with RPG elements. Graywalkers takes inspiration from genre juggernauts Fallout, X-Com, and Jagged Alliance, which it aims to blend together.  Set in world long after Heaven and Hell merged with the mundane world bringing about the apocalypse, players will encounter a wide variety of races and mythical creations as they seek to restore balance to the world and drive the darkness back. At least in the campaign, when it launches. 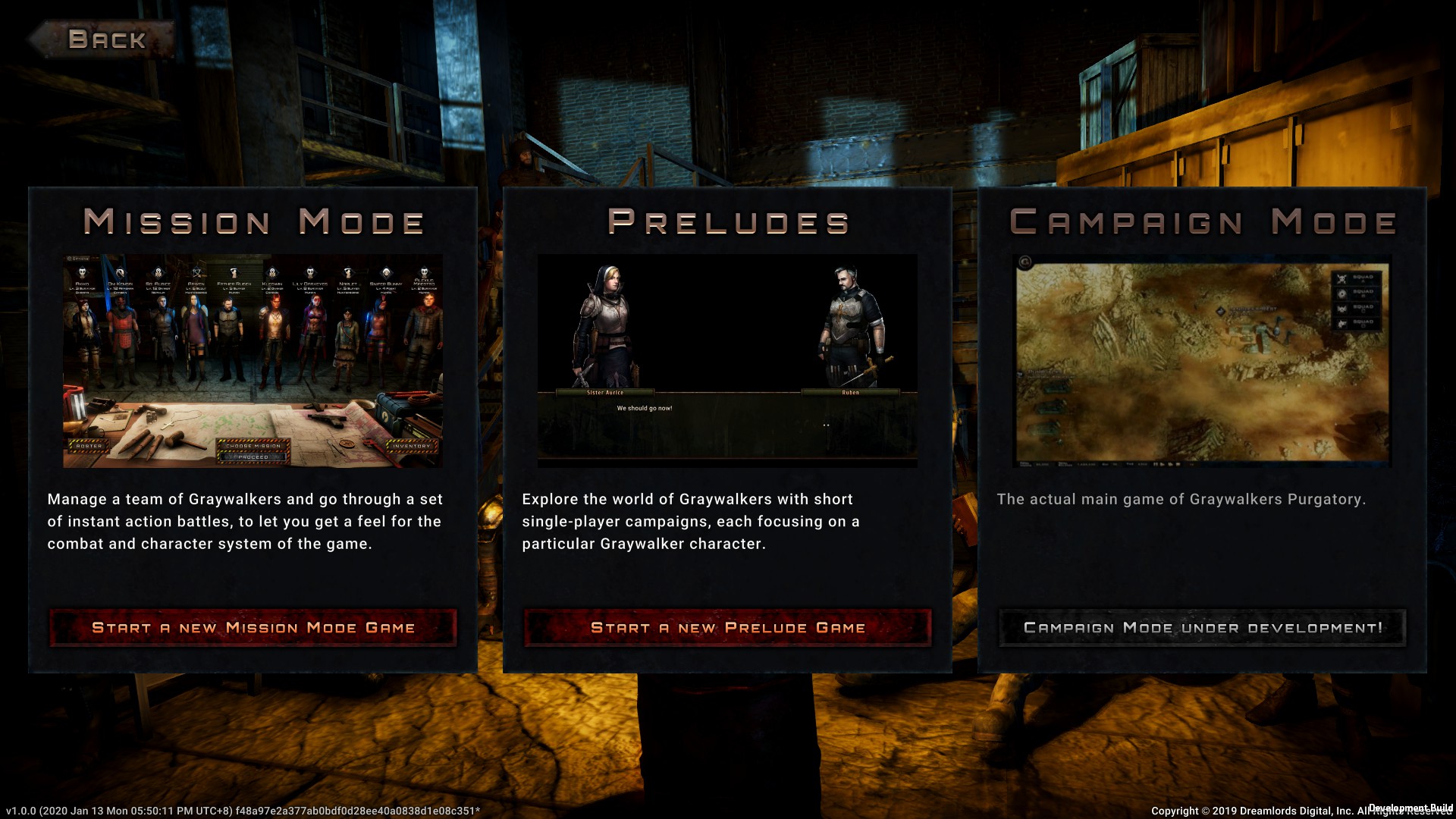 Right now though the game will only launch into Early Access with two of the planned three modes: Missions and Preludes. The full release will see the campaign mode added to the game.

Missions was the mode going into the game I believed I was going to love the most. It gives you a starting character and through accomplishing various missions your roster of characters grows, you acquire more resources, and gain experience to level up each of your characters unlocking points that can be spent on abilities and stats.

All to then take on harder and harder missions. In essence Missions is the game’s challenge mode, but rather than being a slew of scenarios to play through there are added role-playing mechanics added to make it a more fleshed out feature.

With a lot of features not having been fully implemented yet I found my time with the mode to be somewhat lacking. The story elements were competent, but with items outright not working healing was next to impossible. Stat values on aiming very well could use some tweak as the game does not sport independent bullet tracking. A feature that games like Phoenix Point and Xenonauts have demonstrated adds new layers to the balance of combat. 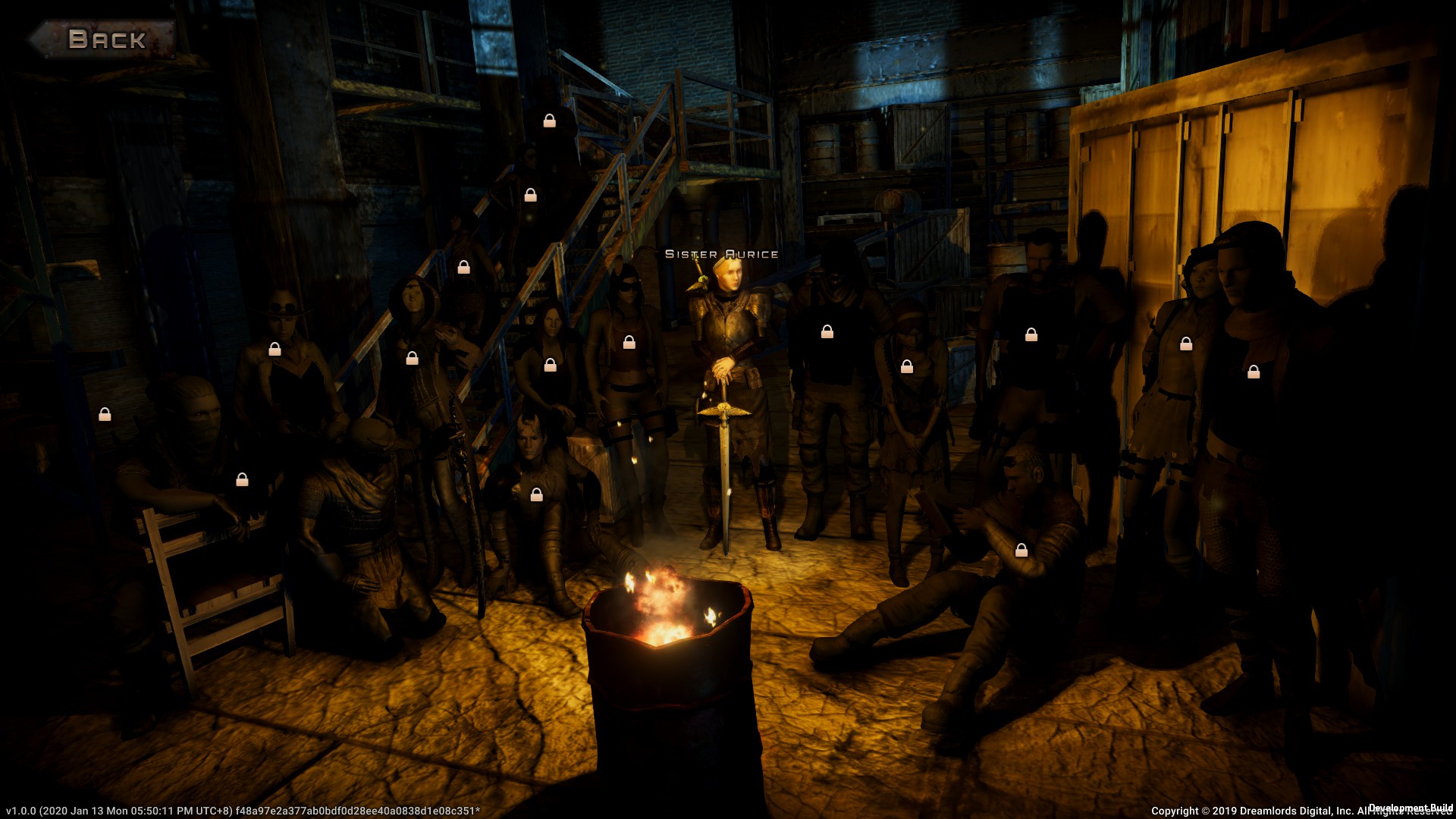 Initially I wasn’t too enthralled about the Prelude mode, but it quickly became my favorite mode despite  my run being ended as a result of a bug and no auto saving causing a wipe. Again the writing is not not going to blow minds, but it fleshes out the nature and structure of the world to a believable extent. This leads me to believe that when the campaign launches it will be my favorite feature of the three.

Prelude ties to the campaign by giving playable back stories to the 36 graywalkers you will encounter and recruit throughout the campaign. Though at this juncture I don’t know if all 32 will be featured, but each of the prelude’s is like a mini campaign with a set cast of characters and a self contained narrative it wish tell. 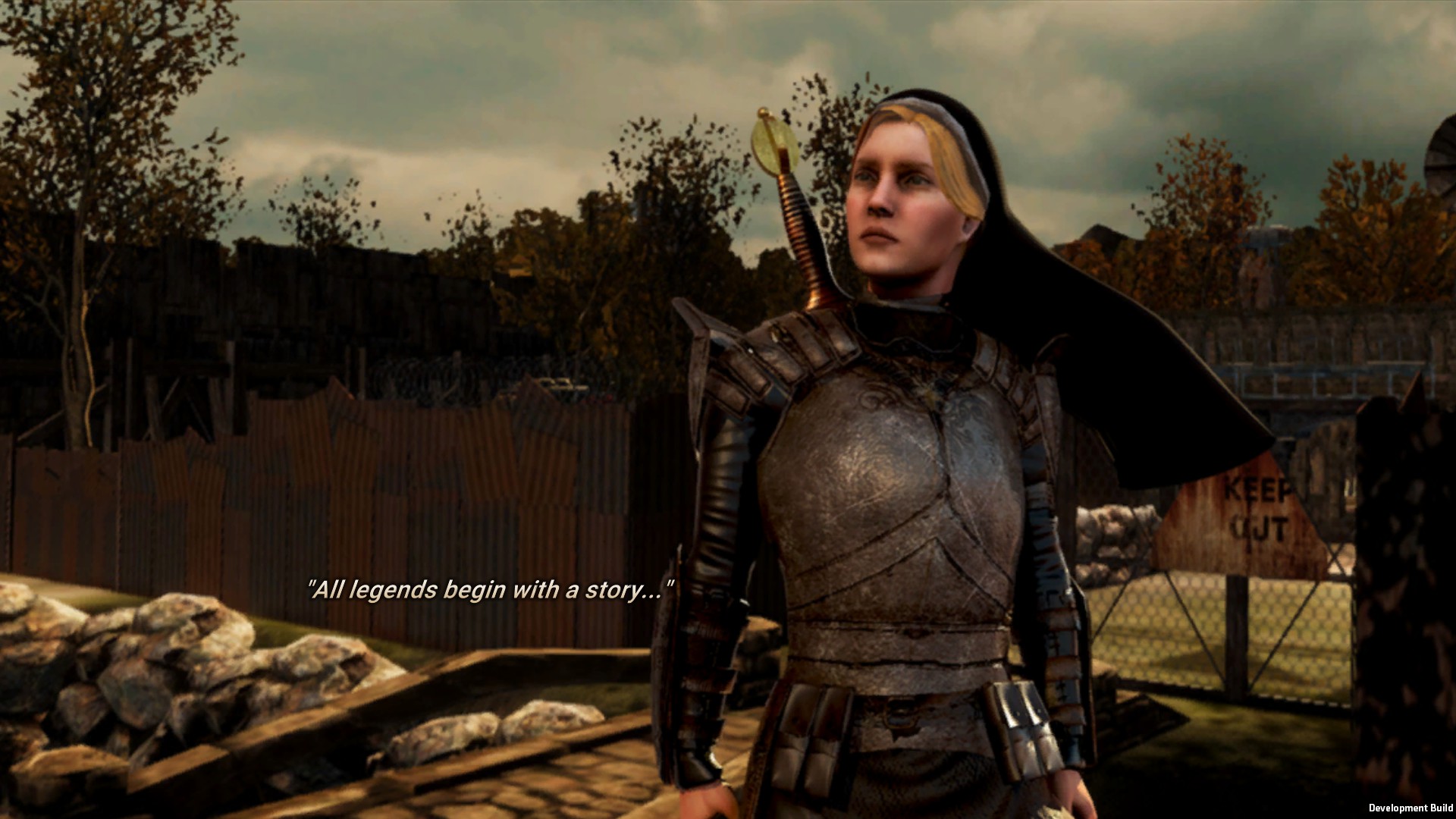 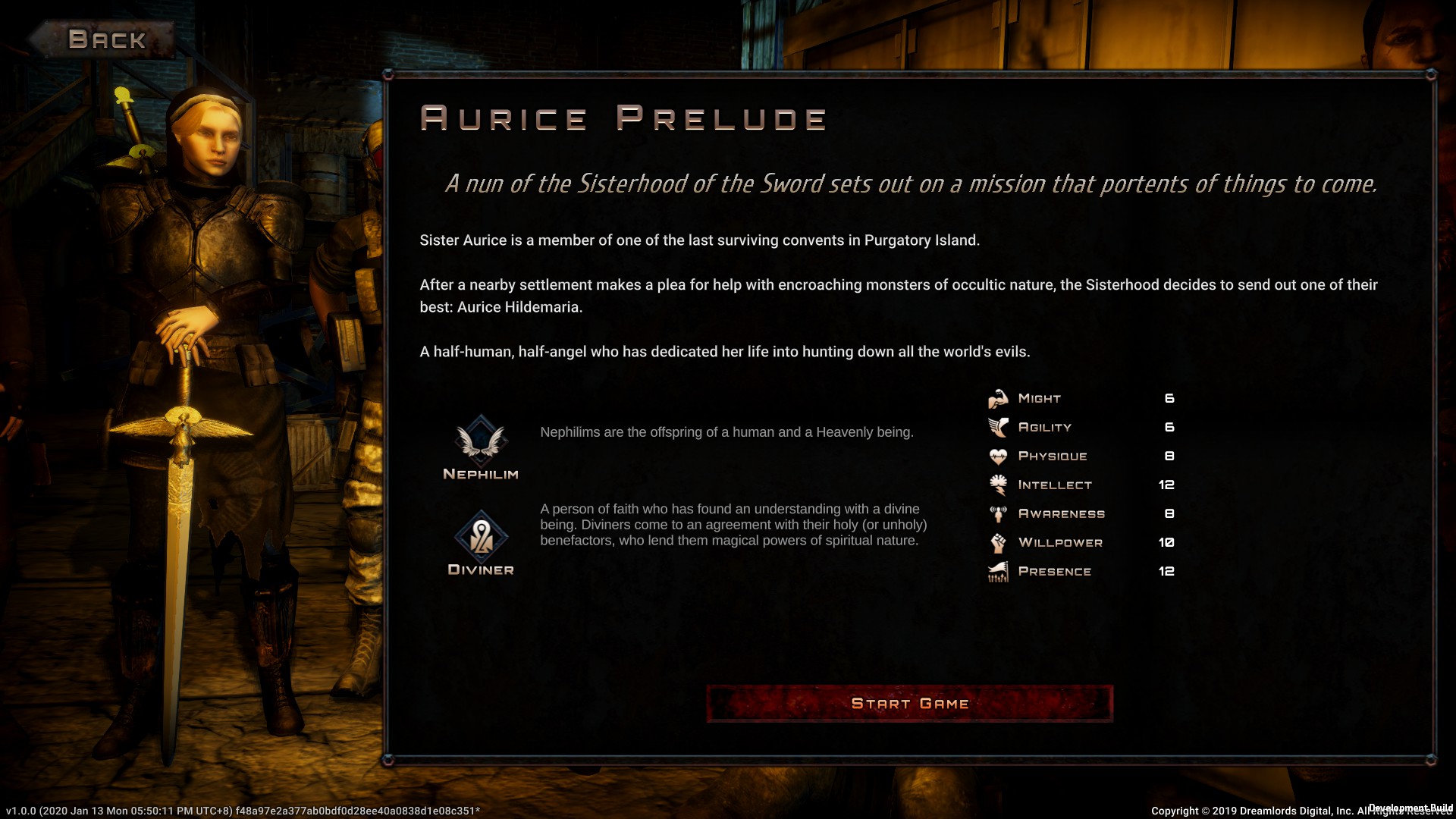 During my time with the game only a single prelude was available with the promise of more being added in later updates. This one  centered around Aurice, an orphaned Nephilim child who was raised by the militant religious order called the Sister of the Blade. There were dialog options present during the campaign, but they appear to affect more what variety of response(s) you will receive rather than the course of the narrative.

It did allow for limited role-playing with Aurice, choosing between having her silently and passively going about as she was told or being a defiant rebel that bucked the hierarchy. Though the choices were probably meaningless, allowing the expression of a character that understand and follows the chain of command, but will not relinquish their personal desire to see the monster that killed their friend brought to justice did create a greater sense of attachment with Aurice than otherwise would have been there had I just been reading through dialog, move forward, fight, rinse repeat.

On this journey I was joined by two other sisters whose names I didn’t write down nor did I find particular importance to their function. One was my Rambo-tier comrade, utilizing long range assault rifles, and the other was my highlander demonstrating there can be only one surviving faction and it is us. There was a sickening delight in watching monstrosities being cut down by burst fire, while under the slashing attacks of the highlander. Or alternatively being smote with holy providence in the form of divine magic. 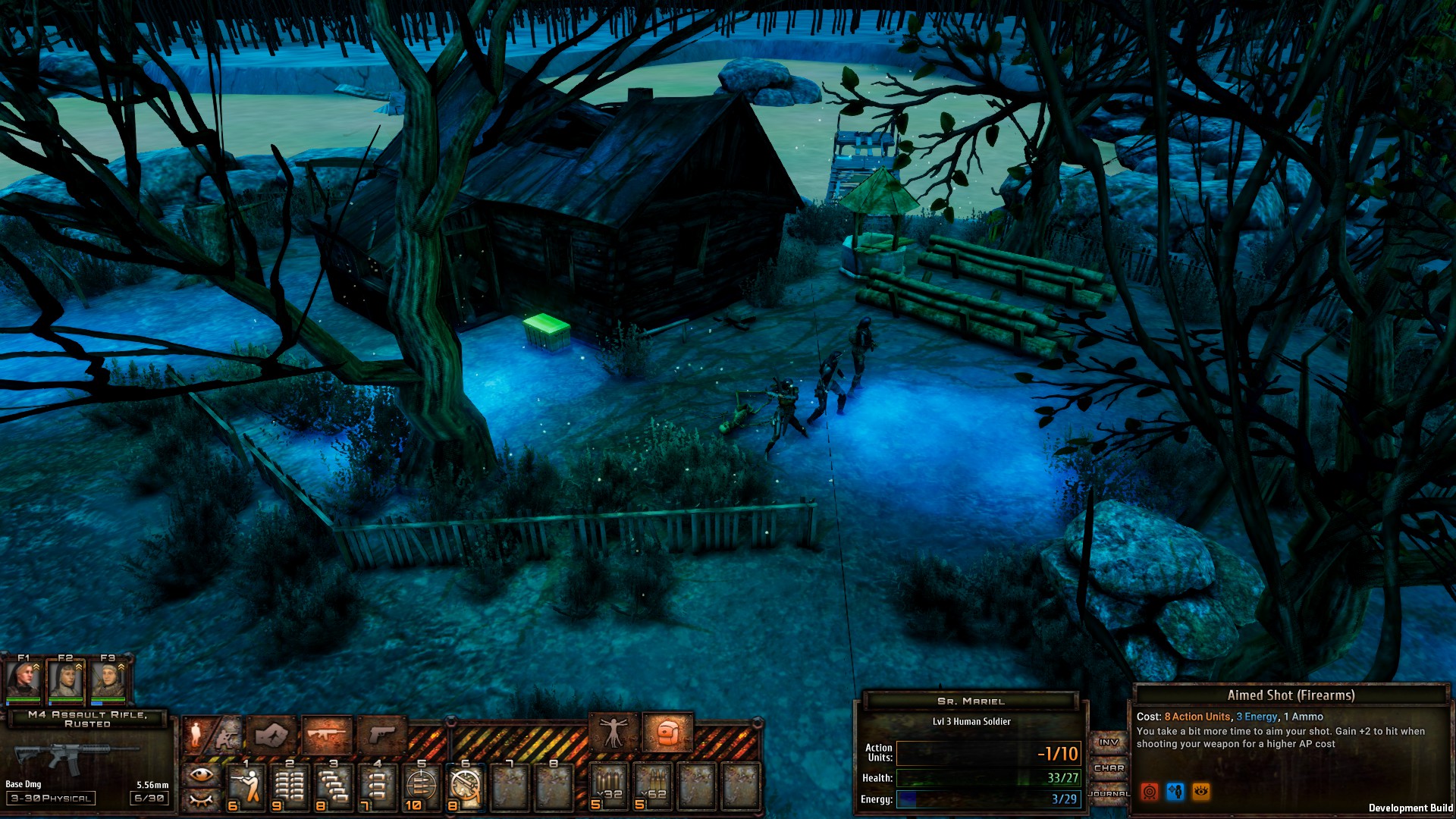 When outside of combat the selected units will move around in real time, but enter a grid-based combat phase when they encounter enemies. Attacks, dodging, and any action are all based around stats and dice rolls. RNGesus in this outing is fairly generous with his rulings. To the point I legitimately wondered if enemies could hit the player characters as none of the original monsters were able to land a single melee blow against any of my party for quite some time.

What is very pleasing about the game’s design is the level of competence that has gone into the HUD system. Everything has a slot, while not overcrowding your screen. Each weapon equipped has its own tab, as do quick items, magic, and ammo. There is no cost to action from switching between these tabs, so if you’re duel wielding some sawed off shotguns they can make quick work of the enemies. Or they would if their aim values were adjusted during the mission I utilized them on.

This plays back into my qualm about independent bullet tracking and difficulty. With independent bullet tracking a shotgun at 23% chance to hit fires 10 spread, each of those 10 spread has a 23% to hit. Shots can be either entirely devastating or soul crushingly disappointing. It isn’t a mark down for Graywalker’s to not have this feature, but values as the game progresses in development should be tweaked to be fairer. 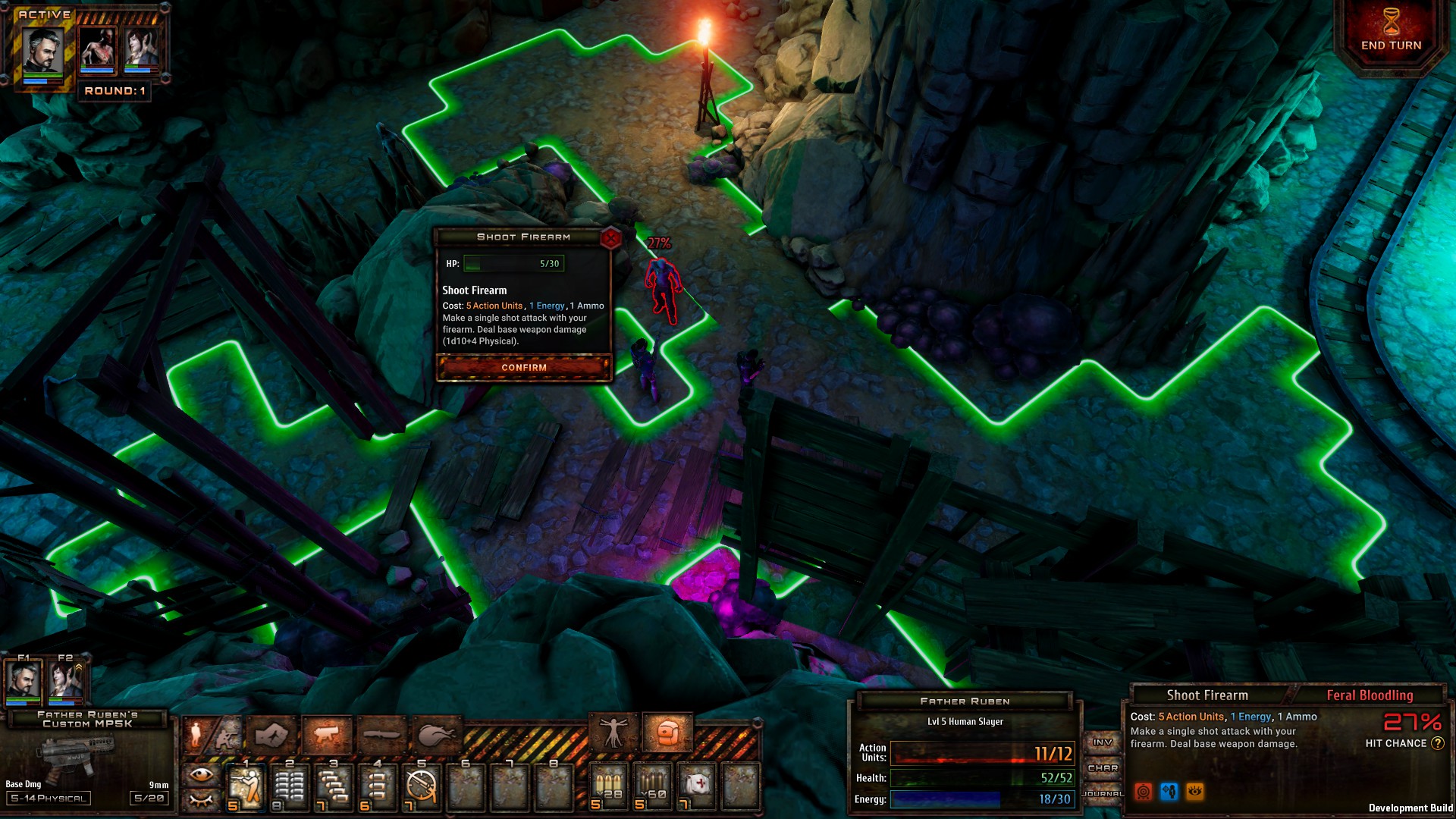 Every action during combat drains your energy. No energy, no magic, no attacks, but you can still run screaming (aka retreat) as that apparently doesn’t require energy. Items are intended to play a role in replenishing energy, but none of the items worked. An issue that would plague my time with missions as I found myself unable to heal with low accuracy with the shotguns causing significant damage to be taken.

During Preludes I had to stop and look up the quick guide to find out that there was a replenish button on the bottom left side of the HUD, but once I understood how to utilize the mechanic it was a simple matter of incorporating it into combat plans.

Combat for the most part is rather easy. Overly easy in the preludes and probably equally as so in the missions where the shotgun accuracy values adjusted to a more reasonable level. Yet during combat, as actions and movement both drain from the action points the cursor will tell you how many action points will be left after the move and how much the move will take. This cut out so much time from having to quick math it here and there only to hate my idiotic soul if for some reason I mathed wrong. It doesn’t happen often, but when it does it tends to screw me in this genre something fierce.

Overall the game is off to a good start. Aside from features not working and not being implemented, the only bug I encountered was in a boss fight in the Cathedral whereupon the demon refused to pass on its turn nor carry out an action during its turn. This froze combat and I was forced to deal with a wipe as there was no auto save data to load and I had not been making any saves up until that point. 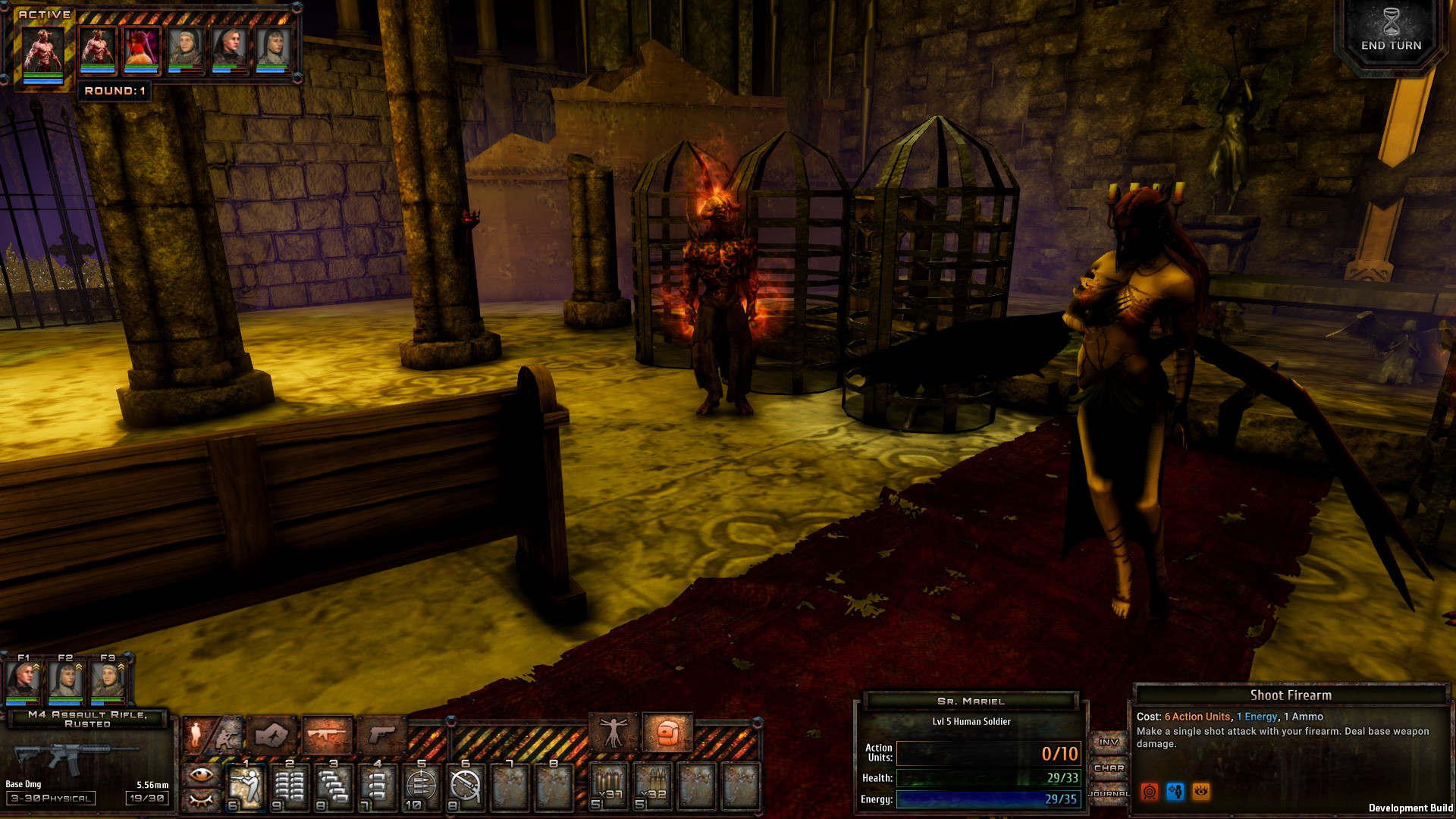 Items need to be made to work as missions ground to a halt because of a lack of ability to heal, whereas in Preludes you were given a healing spell that compensated greatly for the lack of items. Perhaps when items work my impressions of missions will change, but right now I look more forward to additional Preludes than I care about the mission mode.

Underneath it all there are good bones to the game’s constitutional structure. The HUD looks and functions well. The mechanics are solid and the only thing for the developers to do is expand upon them and implement features. I look forward to seeing whether they can successfully merge those great legacies into a single game. Right now though the game is rather bare bones, but it is one worth keeping an eye on.