Gamers have been waiting for quite some time to get their hands on Samurai Shodown for the Nintendo Switch. Well, SNK has confirmed that the game will launch next month on February 25th.

Pre-purchasing is currently available for Samurai Shodown over on the Nintendo eShop.

Those who pre-purchase the game for the Switch will receive a 10% off discount of the game, as well as a bundled package of Neo Geo Pocket’s Samurai Shodown 2. If you pre-order a physical copy of the game, the package comes with an additional controller skin featuring Haohmaru and Yashamaru, the latter of whom is the newest character added to the roster.

You can also scope out the limited controller skin bonus with the promotional image below from the press release. 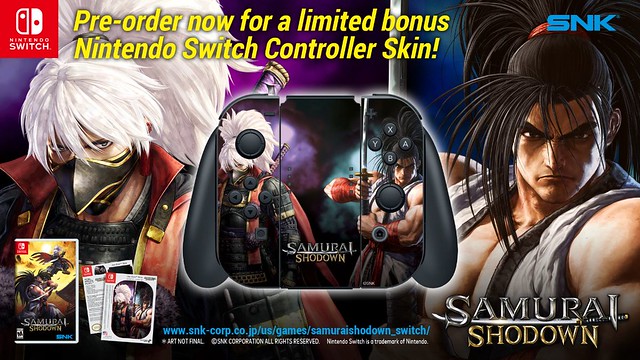 SNK seems to be working quick in trying to secure that release on the Switch. Back in November of 2019 they had originally announced that the game would be arriving in early 2020 for Nintendo’s little hybrid that could, but details on the release date were sketchy. Well, they’re no longer sketchy and the game will be playable both in mobile and TV mode.

If you’re curious how well the game runs on the Switch’s hardware, there’s a 10 minute video that showcases some of the gameplay in real-time, courtesy of YouTuber ContraNetwork, which you can check out below.

The game certainly feels like a 3D throwback to the 1990s, replete with blood, gore, and hot bodied babes.

It’s nice that SNK is continuing the tradition of making masculine games for real games, and keeping hot looking chicks present in the titles as well. It means a lot for those who are tired of all these soy-tiered titles on the other platforms.

As mentioned, you can either purchase Samurai Shodown on the Nintendo Switch from the Nintendo eShop or you can get a physical copy from local retailers for $49.99.