Ahmed Khan’s Baaghi 3 is the third entry in the ongoing action series that started back in 2016 with the original martial arts flick starring Tiger Shroff. The upcoming film is more of a satirical action-comedy that sees the lead hero traveling to Syria to take on an entire country filled with Muslim terrorists.

India has had no qualms about openly portraying Jihadists as villains in their films. While Hollywood and most Western streaming services and television networks have forbid shows from portraying Muslims as violent religious zealots due to “Islamophobia”, India has gone in the complete opposite direction. They’ve purposefully portrayed Muslim terrorists as violent and villainous brutes who can’t be reasoned with nor negotiated with.

Baaghi 3 is no exception to this rule, with Ahmed Khan’s action-laced satire seeing protagonist Ronnie having to come to the aid of his brother after he’s taken by religious zealots. You can check out the ridiculously over-the-top trailer below, courtesy of FoxStarHindi.

So the hook for the film is that when Ronnie’s brother yells out his name, he appears and disposes of whoever is giving his brother trouble.

This leads Ronnie to another country where he takes on the militarized terrorists and every soldier, tank, and helicopter they can throw at him.

The movie is a little like a cross between Taken and Rambo 3, only instead of helping the the mujahideen he’s fighting against them. 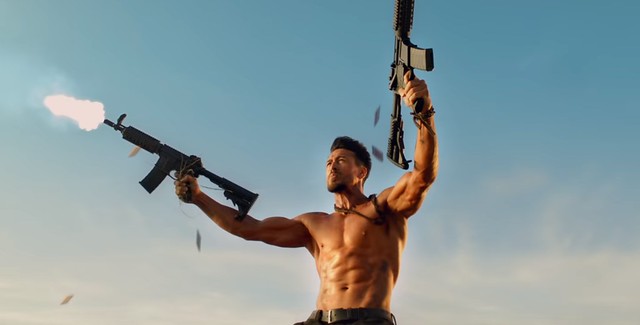 The movie obviously doesn’t take itself seriously at all, and Shroff is given a lot of pulp to sink his teeth into while flexing his muscles and shooting guns at soldiers while explosions go off all over the place.

That’s not to mention that the end of the trailer is seriously laugh-inducing with Ronnie hitting all of the soldiers and then their bones break afterward, almost like some kind of nod to Fist of the North Star.

The thing is, the series didn’t start that way.

The original Baaghi was far more grounded than its successors, even if not by much.

The first film followed the arrogant street fighter Ronnie as he moved up from underground fighting to joining a Shaolin temple to properly learn how to become an excelled fighter.

It was like a lot of the traditional kung-fu classics, but combined with the violence and plot of newer films like The Raid. After Ronnie is shot and left for dead, his girlfriend is kidnapped by a local gang.

Ronnie, after going through his extensive recovery and training period, heads to the gang’s hideout to travel to the top floor to rescue his girlfriend.

Yeah it’s kind of cheesy but it’s the kind of film that would have fit in well within the Hong Kong movie catalog from the 1980s.

Instead of keeping with the tone set with the original Baaghi, the two sequels decided to get goofier and more over-the-top, becoming satirical action films instead of straight maintaining any sense of seriousness.

It’s also worth noting that Shroff looks like a legit action star in the Baaghi movies. He was also in the equally over-the-top action-thriller War, starring opposite of Hrithik “Dual Thumbs” Roshan.

You won’t have to wait long for Baaghi 3 to arrive, though. The film is scheduled to hit theaters on March 6th, 2020.