Ahead of the public showcase at the Focus Home Interactive booth that will be setup at PAX East in Boston, Massachusetts between February 27th and March 1st, a new trailer was released for the cel-shaded, rogue-like action-RPG known as Curse of the Dead Gods.

The three and a half minute long trailer gives you a look at more of the combat, some of the relic abilities, and plenty of the enemies that you’ll be facing off against throughout the game.

The video covers the basics of the gameplay, which centers around a greedy treasure hunter looking to attain immortality. He ventures into a seemingly endless labyrinth of dangers, filled with traps to avoid
and undead monsters to slay.

Curse of the Dead Gods sports a bevy of weapons to collect from your enemies, treasure chests, and hidden crevices, ranging from two-handed spears, to swords, to dual-wielding daggers.

There’s a wide variety of weapons at the disposal of the player and each weapon has its own advantages and disadvantages depending on your play-style.

Much like other dungeon-looters out there, different weapons also come with status effects, buffs, or debuffs, enabling you to pick and choose what best suits the enemies in a certain area based on the passive or active bonus attributes.

Another neat aspect of Curse of the Dead Gods is that the game affords players the use of both blocking and parrying.

If you time your blocks just right you can stun an enemy and then quickly launch a counter-attack to deal critical damage. This gives the game more of a tactical back-and-forth feel in the combat compared to games like Diablo, where it’s more about how fast you can execute your skills before an enemy can get off their attack.

If you’re good enough you can even use the traps in a room to your advantage by cornering an enemy and activating the traps to damage them. 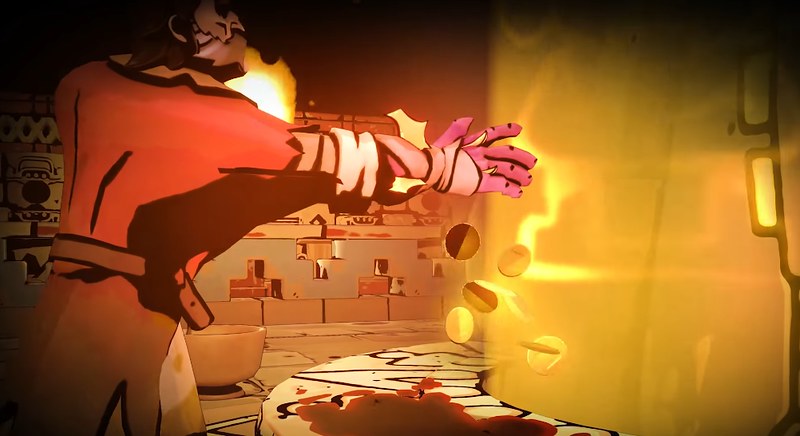 The game really shines with the use of relics, curses, and sacrifices.

As you progress and gather treasures and goods you can offer them up in exchange for relics to boost your abilities or modify the game. However, the deeper you go and the more you expose yourself to certain attacks, the more your corruption meter will build. Every time the meter fills to the top it will add a curse to your character and the meter will reset.

Curses are detriments but you can select what curses you incur, and some of these detriments can be used to your advantage. As they explain in the video, exploding enemy bodies work well when you’re facing off against hordes of enemies.

Alternatively, one curse might make the traps in the temple more frequent, and even though it may hinder your progress it can also be used to lure enemies into those very same traps to deal massive damage to them.

It’s still a typical isometric ARPG, but there are some interesting mechanics at work in Curse of the Dead Gods that could make it a standout sleeper hit.

You can follow the game or wishlist it if it interests you by visiting the Steam store page. Passtech Games plans on releasing Curse of the Dead Gods into Early Access starting March 3rd.