Stillalive Studios and Astragon Entertainment recently announced that the real-time strategy game, Drone Swarm, will appear at PAX East and give gamers a glimpse at what’s to come from the groundbreaking new RTS where more than 32,000 drones will swarm the battlefield.

The new video is just under two minutes long and is basically a recap of the last two years of development, including their attendance at GamesCom where they demoed the game’s first major trailer for the public.

Stillalive reveals that they’ve partnered with Studio 451 from Michael Bay, who will work on a tie-in comic book for Drone Swarm that will also coincide with the game’s cinematics. You can get a quick glimpse of Drone Swarm and some of the gameplay and cinematics in the video below.

The real big news is that the game has secured a late 2020 release window on PC and will appear at PAX East in Boston Massachusetts between February 27th and March 1st, 2020.

They’ll be demonstrating the game for the public so you’ll finally get a good idea of what the gameplay is like and how you’ll be able to utilize the 32,000 AI drones to your advantage in the game.

Players take on the role of Captain Carter, a male. I know, it’s shocking in [current year] to actually get to play as a male captain for once!

Anyway, you’ll be in control of a ship that can manipulate the very same drones that nearly wiped Earth off the map of existence. You can use them both offensively and defensively. 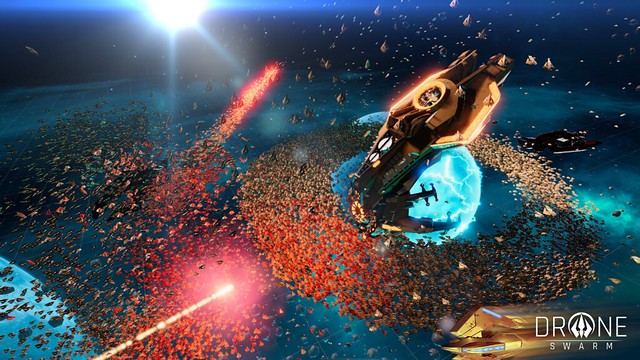 Your goal will be to lead the colonization ship, Argo, to find a new Earth. As you travel across the galaxy you’ll have to fend off the last surviving humans using an army of drones.

You’ll not only use the drones defensively or offensively, but you’ll also need to direct them to gather resources for you across your travels, which can then be used to upgrade the Argo mothership.