Who doesn’t enjoy a good abyss gazing? Staring into a wonderful sea of inky blackness all at once inert yet gazing back at the curious spectacle which presents itself before it. Foreign to it, but welcomed all the same as it in turn welcomes the abyss into it. Imagine my horror when during my usual weekend abyss spa trip that Evil Hat Productions once again emerged from being steeped in a soy-infused sweat.

Next, I expected to hear of them was on their fated day where we would be welcome into the fabled crypts of the master list. After blatantly telling consumers they’re proud progressives and to not buy their game what else of note could come from them? Apparently not content with mere progressive underpinnings they’ve elected to further dilute the entire purpose of a Lovecraftian mythos. 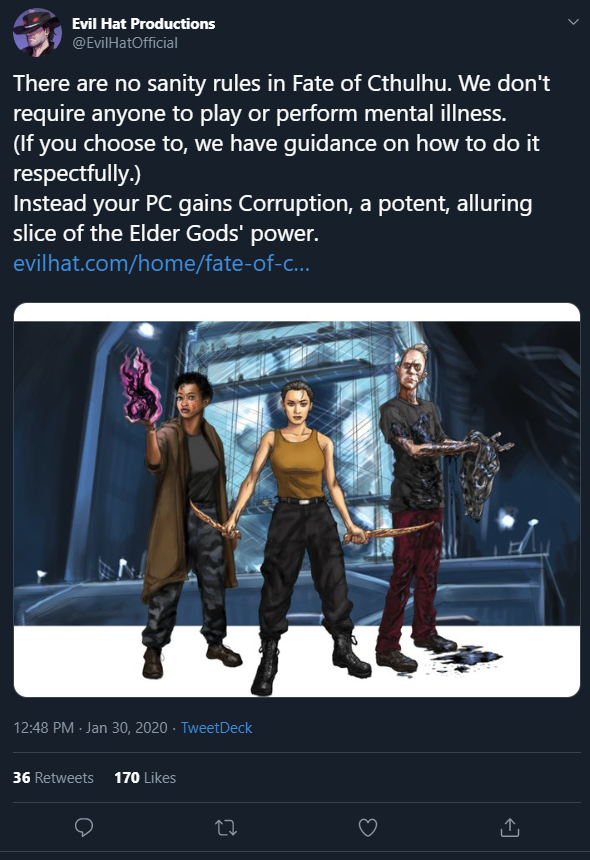 There are no sanity rules in Fate of Cthulhu. We don’t require anyone to play or perform mental illness.
(If you choose to, we have guidance on how to do it respectfully.)
Instead your PC gains Corruption, a potent, alluring slice of the Elder Gods’ power.https://t.co/v0F853zsM0 pic.twitter.com/13tLqmE3wR

There are no sanity rules in Fate of Cthulhu. We don’t require anyone to play or perform mental illness.

(If you choose to, we have guidance on how to do it respectfully.)

Instead your PC gains Corruption, a potent, alluring slice of the Elder Gods’ power.

Sanity has been an integral component of the Cthulhu mythos no matter the form it takes, be it a game, a book, a movie, and especially tabletop genre. Even if base games, modules, home-brew, and house rules hadn’t long since established this as a mechanic in tabletop it still wouldn’t be stunning and brave to remove “mental illness from a game.”

Twisting their logic back upon them, this is Evil Hat Productions stating that there is something inherently bad and stigmatizing about mental illness. That it should be obscured and treated with shame because it makes people uncomfortable.

That they would consider corruption which by its very nature must alter the person on a psychological level is entirely separate from madness demonstrates an inherent lack of any understanding of the basic concepts and themes of the mythos they are riding the coattails of.

Certainly, many campaigns do not utilize madness or mental illness as a direct mechanic, just as many of the novels broaden their horizons beyond simple insanity. Yet increasingly the developers continue to move towards something alien to the mythos itself. Something inherently not what it claims to be.

Naturally, it gets worse. 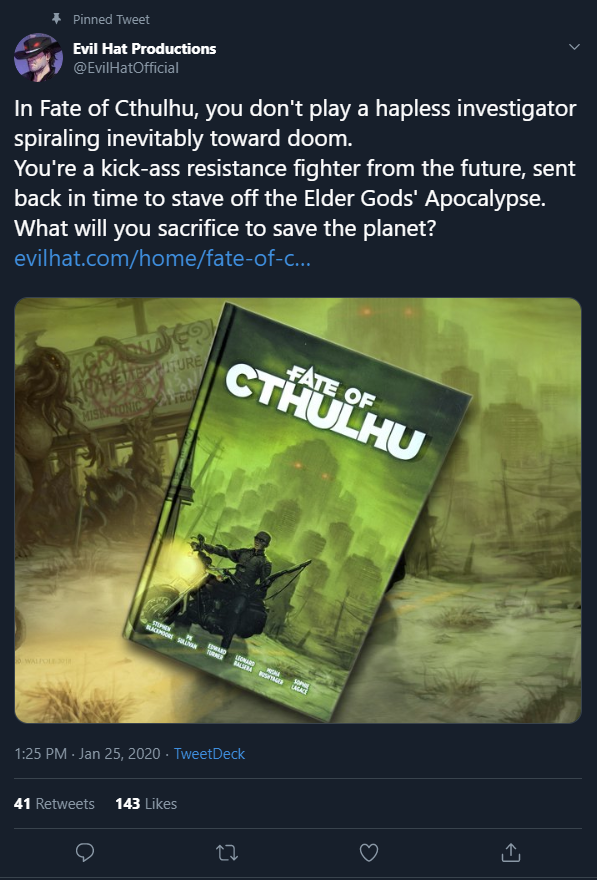 In Fate of Cthulhu, you don’t play a hapless investigator spiraling inevitably toward doom.
You’re a kick-ass resistance fighter from the future, sent back in time to stave off the Elder Gods’ Apocalypse.
What will you sacrifice to save the planet?https://t.co/v0F853zsM0 pic.twitter.com/tzwg1941Y3

Apparently not your sanity, humanity, or anything worthwhile because you’re not hapless in the face of powers greater than in many instances an individual’s mind can even comprehend. Though it is theoretically possible to kill an Elder God, it remains the realm of idle speculation that man in a million years will probably never ever hope to achieve. Yet you’ll be able to punch out Cthulhu and save the day.

Much like evil in the real world omnipotence isn’t what it used to be. With many far more fleshed out, less politically infused and more popular options available, what market does Evil Hat even aim to carve out for themselves? Homebrew alone relegates the value of what they are undertaking to next to nothing. Were it not for the example it sets in going broke it would have no value.