Twitter is constantly escalating what they consider to be “hateful conduct”. Terms like the “Homocaust” will net you a one week ban because Twitter considers it “hateful content”. Dare call someone a “THOT” even though they’re an Instagram prostitute making money on lonely 12-year-olds lifting their parent’s credit cards and dumping money into the coquette’s coffers on their borderline, dog-sniffing, cat-kicking, Twitch streams? Well, you’ll be banned from Twitter for dropping such sublime truths.

Twitter user BlameThatGuy informed the public at large that one of his accounts was suspended for using THOT for its intended purpose.

If you’re unable to view the image in the tweet, you can see it below, wherein Twitter informs him that “THOT” is considered “hateful conduct”, and that they would not be lifting his appeal because they feel as though his use of the word “THOT” was a violation of their rules. 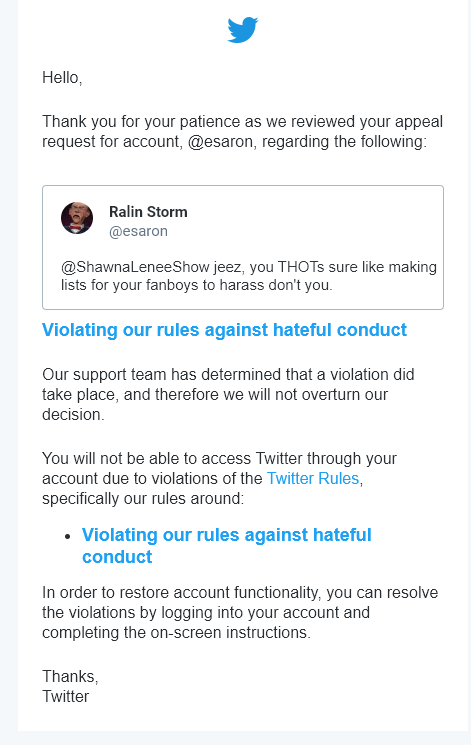 Twitter even escalated their suspension game against BlameThatGuy by targeting his other accounts, stating that since they banned his one account that him having other accounts (which have been active for years) was considered “ban evasion”.

oh it gets much worse. They eventually just flat out lied and banned my accounts. pic.twitter.com/N4j3btp7eU

TheGG found out the hard way that “Retard” is no longer allowed on the platform when they were given a week long suspension.

Basically Twitter is word-policing people to only use the terms that they allow, and in ways that they find acceptable. They appear to be running to the aid of THOTs in order to protect them from people saying mean things about them.

Some people have suggested substituting typically profane words with Big Tech terms. For instance, you could say something like, “Look at that low I.Q., Facebook acting like a fool.” Alternatively you could say, “She’s whoring herself out like a disgusting Google.” Or you could say, “I’m sick and tired of these Twitter-skinned mongrels invading my country!”

I’m pretty sure that eventually they’ll tweak the algorithm to ban users using substituted words, but it would be quite funny to see them try.

(Thanks for the news tip BlameThatGuy)