Raw Fury and U.K-based outlet Upstream Arcade announced that West of Dead, a twin-stick tactical shooter, has entered into a limited open beta for both Xbox One and PC, and it will run through February 24th. The game’s standout feature is obviously the comic book art-style that relies on cel-shaded visuals and high-contrast shaders to give the impression that you’re looking at a graphic novel in motion.

The game is billed as an American Gothic tale about William Mason, voiced by Liberal actor Ron Perlman, an undead gunslinger who awakens in Purgatory and attempts to unravel the mystery behind his last known memory about a figure in black.

The game follows the flaming-skulled Mason through a series of levels set in Purgatory, Wyoming in 1888.

When I originally saw the e-mail for the game I skipped over it to cover other stories, but I returned to it to see what the beta was all about and then I saw the trailer and was instantly taken in by the concept.

West of Dead is an isometric twin-stick shooter. But it has some really cool features. You can quickly take cover by most objects once a firefight breaks out by hopping behind said object, or you can use your pistols to ricochet bullets off walls to hit hard-to-reach enemies.

The real-time combat and fast-paced action is heightened thanks to being coupled with an aesthetic that seems almost to capture the graphic novel feel of Frank Miller’s classics.

Of course, no one can deny the fact that there’s an obvious inspiration from Marvel’s Ghost Rider in the design of the character and his divine quest of putting bad souls to rest for good. 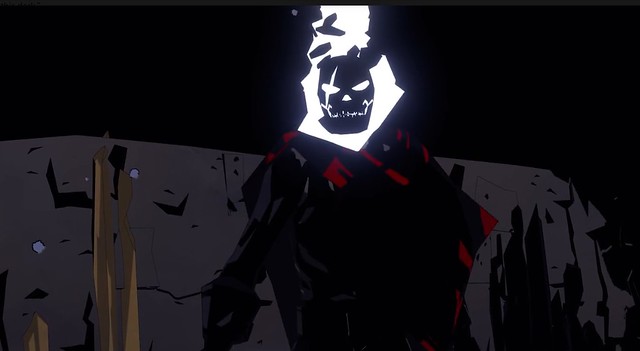 You can tell that the developers really know their way around a functional game with a neat hook and a great look. I suppose that’s to be expected given that West of Dead is headed up by former Lionhead Studios alumni Adam Langridge and Imkan Hayati.

It’s sad, though, that I have to exercise reservations in my excitement because given today’s politically charged environment in entertainment there’s no telling if West of Dead is an actual, fun-filled twin-stick shooter, of it’s more “Orange-Man Bad!” nonsense radiating from the perpetually-offended minds of those suffering from Trump-Derangement Syndrome.

In any case, if you wanted to give the game a try it’s currently undergoing free open beta testing on the Xbox One and PC right now. You can sign-up for a beta key over on the Raw Fury website or visit the official West of Dead website for further information.