Germfood released a new first-person horror game set in a retail store called Night of the Consumers. The game is currently available for download over on the Germfood itch.io page, where it carries a $1.93 price tag.

The game has slowly been weeding its way through the YouTube Let’s Play space given its themes and horror vibes.

The game is like a low-res 32-bit game set in a grindhouse grocery store environment where crazy customers demand help in the shopping mart and will make your life miserable if you don’t get them what they want. The thing that makes the game so insane is the music, the customer voices, the terrifyingly creepy faces, and the horror vibes.

You can check out a gameplay video below courtesy of Alpha Beta Gamer to get a glimpse of what the gameplay is like.

While a lot of people are saying it’s similar to an early PlayStation One game, I would say it’s more akin to the Build Engine titles from back in the 1990s, or the first-person adventure games like Normality from Gremlin Interactive.

Also the texture work and models are reminiscent to a lot of N64 games more-so than PSX titles.

Anyway, the actual gameplay is based on memorization and time management rather than the typical reflex skills and ammo management, which are the typical skills required in FPS titles.

The main objective is to stock as many items on the store shelves before being waylaid by crazy customers. The more items you stock the more you’ll be able to meet the needs of customers. 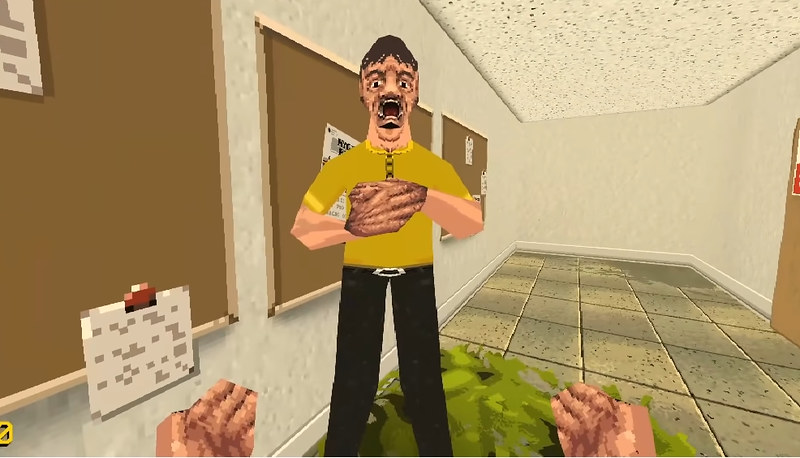 The game takes on a stealth-like element given that the more you avoid needy customers and keep the shelves stocked the more score you’ll get.

If a customer spots you they’ll hound you down like a horror movie icon and demand you point them in the direction toward the item they desire to purchase.

If you’re good enough, you can sneak around customers, grab the boxes, stock the shelves and avoid the ambuscade from the zombie-like consumers.

It’s a bizarre game but it works.

There’s a level of intensity and tension there that’s difficult to put into words, even though there’s no killing or blood or monsters involved. The horror-synth soundtrack and 80’s slasher vibe also adds to the level of urgency.

if you’re interested in checking the game out you can do so by visiting the Itch.io page.