People are excited about the release of the Final Fantasy VII Remake on April 10th, but if you’re hoping for a faithful recreation of the original, that’s not what this new game is. In fact, it’s a complete reboot. Everything changes.

It goes without saying that this article contains spoilers, but I imagine there are going to be some idiots out there claiming that they read the entire thing and are angry it didn’t warn people about spoilers.

In any case, Final Fantasy VII Remake released early in Europe and Australia for retailers due to the coronavirus. Instead of risking further manufacturing disruption due to the quarantines, they decided to put the game out early in the other regions, which resulted in people livestreaming it and uploading content to YouTube.

The cinematic leading up to the ending scene, and just before the big fight with Sephiroth was uploaded to a dummy account is available for viewing below.

The video showcases what should have happened in Crisis Core, but how the timeline is altered, which then leads into a fight involving Cloud, Aerith and the others taking on Sephiroth.

User Leon Evelake posted up nearly 10 minutes of the ending sequence following the events from the video above, recorded off-screen so you know that it’s not fake, and there are a lot of changes to the game. You can watch it below before it gets a copyright strike from Square Enix.

When Square does finally strike the video down, you can check out the alternate backup available on Catbox.moe.

Leon explained in the description of the video…

“For 5 years Square Enix Said they were remaking Final Fantasy 7, they said it was expanded but Faithful , that it was locked in step with the original and that they didn’t add a subtitle because they didn’t want to give the impression that it was a spin off or sequel.”

The users who watched it were none too pleased with how much of a divergence the ending of the remake is from the original, especially given all the changes that were made. This was reflected in the user rating on the video and in the comment section.

If you think that just the ending scene changed, involving Cloud and Sephiroth battling, similar to their showdown in Final Fantasy VII: Advent Children, you’re quite wrong.

There are a host of other changes, including what looks like a possible alternate story development involving Zack and Aerith. Based on the video it appears as if Zack may survive in the alternate timeline because the team defeated what are known as Whispers of Fate, which tried to maintain dimensional balance, almost like The Watchers from the Marvel universe. But with the Whispers defeated the timeline was altered, and it means the story is tossed up in the air.

There’s an outline of all the major story-related changes that takes place, completely changing the events of the game, and basically confirming this is an alternate universe reboot rather than a remake. 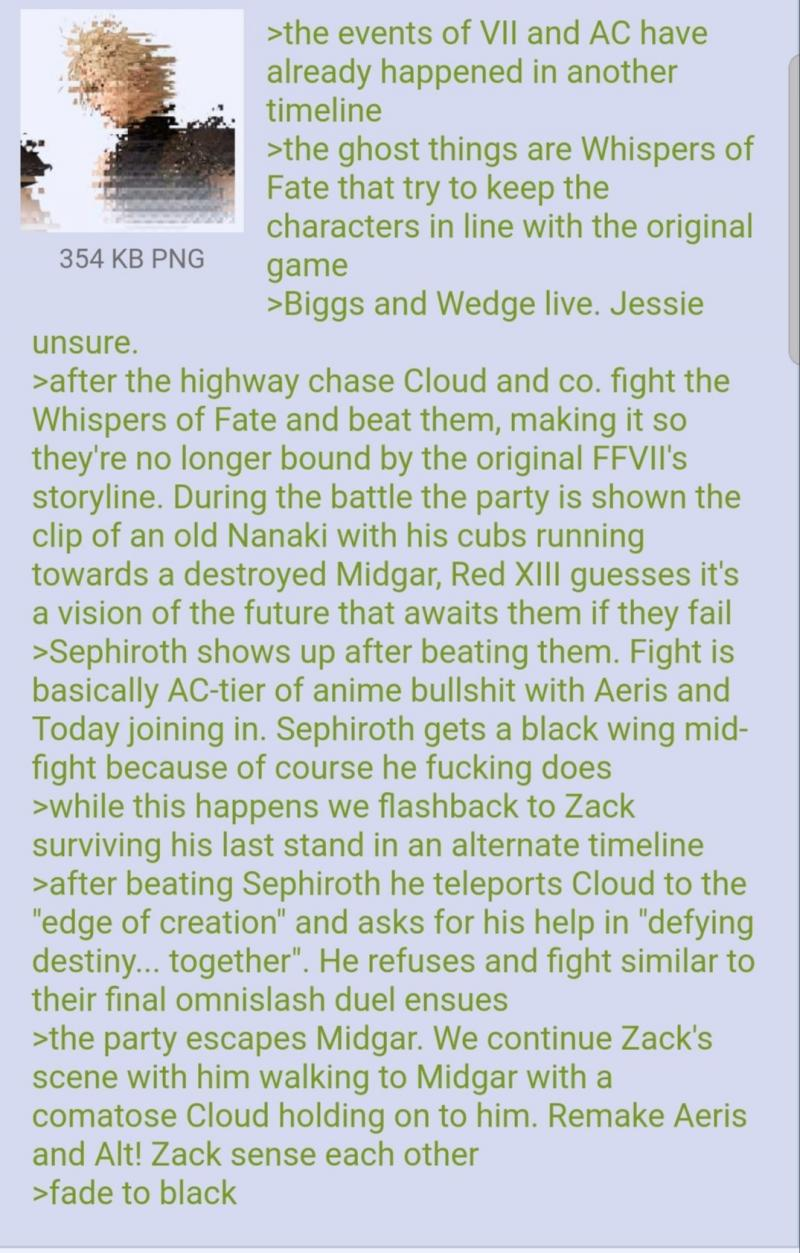 Now I’m sure there are going to be some people yelling out that this is “fake news” or that “Square never promised that this was a remake”, or any number of excuses, but the game is titled Final Fantasy VII Remake, and most people are under the impression that this was supposed to be a faithful remake of the original, just with better visuals and improved sound.

Yet what we’re getting instead is a complete re-imagining, alternate story and all. This now puts into perspective why Tetsuya Nomura was warning people not to spoil the game, because this isn’t really the Final Fantasy VII you grew up knowing and loving. This is a completely different game, even aside from the Ethics Department and censorship nonsense.

If it’s also true that there will be multiple parts, then everything that happens from here on is completely uncharted territory.

What Square should have done was named it Final Fantasy VII: Spiritus Novalis or something, this way people would have known that this wasn’t a direct remake, but set in an alternate timeline.

It’s sad these days that gamers expect that when they purchase remakes that they’re getting actual remakes just with better visuals, quality of life improvements, and updated gameplay mechanics, but instead they’re getting completely different games posing as the original.

(Thanks for the news tip The Embodiment of Madness)