CD Projekt Red has been promoting Cyberpunk 2077 for some time now, but gameplay videos are rare and far or few between. The latest trailer for the game is a completely uninspired collage of gameplay clips that is nothing short of a huge mess.

There’s nothing original or unique about the gameplay, and unlike Crytek’s Crysis from 2007, which featured procedural AI pathfinding, dynamic kinematic adjustments, advanced physics-based destruction and lighting systems the likes of which today’s games still can’t touch, Cyberpunk 2077 is a retread of every commonplace AAA trend we’ve seen for the last decade.

The shooting is passe, the melee combat looks scripted, and the driving is just a hodge-podge of the same old “cinematic” events we’ve seen from every other AAA game out there. That’s not to mention that the trailer contains a superfluous use of ‘F’ bombs for no other purpose than to try to seem “edgy”.

Nevertheless, people are still salivating over the trailer as if it’s the second coming.

On the upside, a few people did note that the trailer isn’t quite as good as the hype train would lead them to believe. 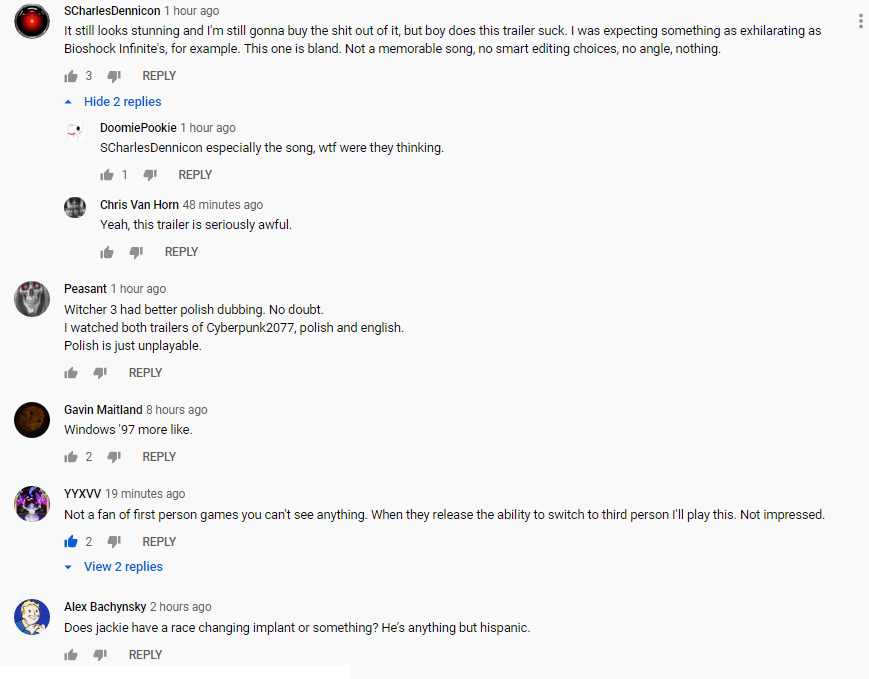 The people who are “awake” give me some brief respite of hope in thinking that maybe the normies won’t be completely subsumed by the mass marketing machine for which Cyberpunk 2077 has been hitched.

Now it’s not all bad news, though. There are a few things done well in the trailer compared to past promotional material. For instance, they finally showcased a few females that don’t look like busted up robot monkeys, and they also highlighted some NPCs who aren’t completely degenerate looking. But that minor plus doesn’t compensate for all the other problems the game suffers from.

However, the plot and scope of the game as depicted in the trailer is completely disheveled. I couldn’t make heads or tails as to what was supposed to be going on or what the general motivation is for the characters. It seems fatalistic in a sense.

But it’s all a wash anyway since Cyberpunk 2077 is on the Traitors of America master list. They overhauled their logo for trash month, and they changed female ‘V’ to accommodate the crazies burning down cities across the United States. So I won’t be touching this game with a ten foot pole.