At the start of June Slightly Mad Studios announced that Project CARS 3 would be arriving at some point in the summer for home consoles and PC. We didn’t have an exact release date at the time, but the developers followed up a couple of weeks later to confirm that the release date for the third entry in the once crowdfunded racing sim is set for August 28th, 2020 on Xbox One, PS4, and PC.

Not that that matters much given that the only gameplay we’ve seen so far looks far from simulation-like. In fact, Project CARS 3 looks more arcade and less realistic than the original Project CARS from 2015. Don’t believe me? Check out GameRiot’s video where all assists were turned off and look at how much the car “glides” around the track.

The sound of the vehicle is nowhere near as weighty as the sounds from the first game, and it feels like weight distribution is almost non-present, and there’s almost no indication of realistic tire physics based on the way the car is handling the turns. I didn’t get any sense of slippage, or traction adjustment; there didn’t appear to be any roll distribution on the banks; and it never really felt like the driver was trying to wrangle a speed beast intent on tearing up the asphalt. It all came across as rather… mundane.

But if you think the video above is bad, GameRiot had to post it up because the previous video was downvoted to Tartarus due to the game feeling like – in the words of commenters – Need For Speed: Shift 3. 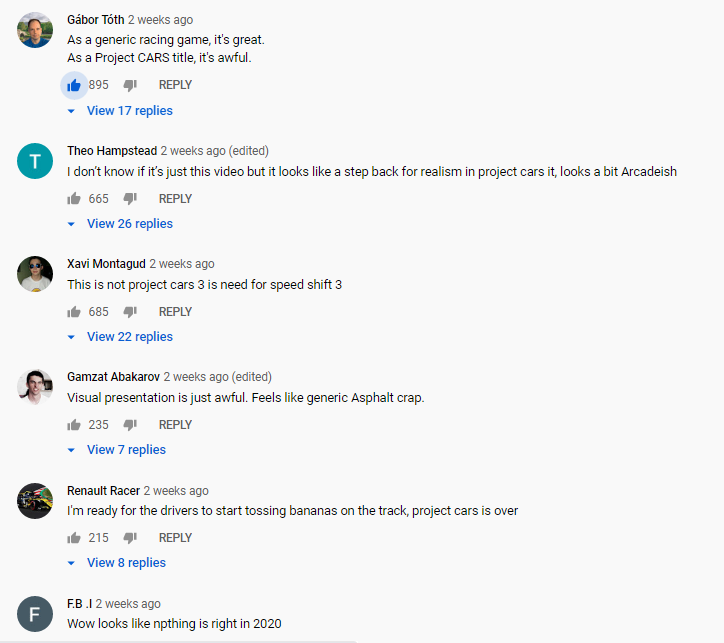 I can’t fault them for their criticisms, and they’re right.

The original Project CARS was an extremely hard but rewarding racing SIMULATOR. You had to really master and understand the handling of the vehicle to get good at the game. You had to make constant adjustments to compensate for weather, slippage, the length of the race, and a hundred other variables that could help or hinder you during the race.

It’s one of the most frantic, nerve-wrecking and enjoyable racing games ever made. It’s certainly not for casuals.

I also agree that this looks like a good generic racer, or a decent attempt from Need For Speed trying to be realistic, but it seems like a far cry in quality compared to the original Project CARS.

And for those of you who forgot just how far ahead of the curve the original Project CARS was, remember this gem?