YouTube is shadow-blocking/banning BitChute links posted in their comments or through the community section of the site. This was discovered and detailed in a very thorough video by content creator TealDeer.

TealDeer tested whether or not BitChute was being shadow banned by posting a link to a BitChute video in the comment section of YouTube. However, as the video shows, when viewing the comment as another user the link to BitChute redirects back to YouTube. 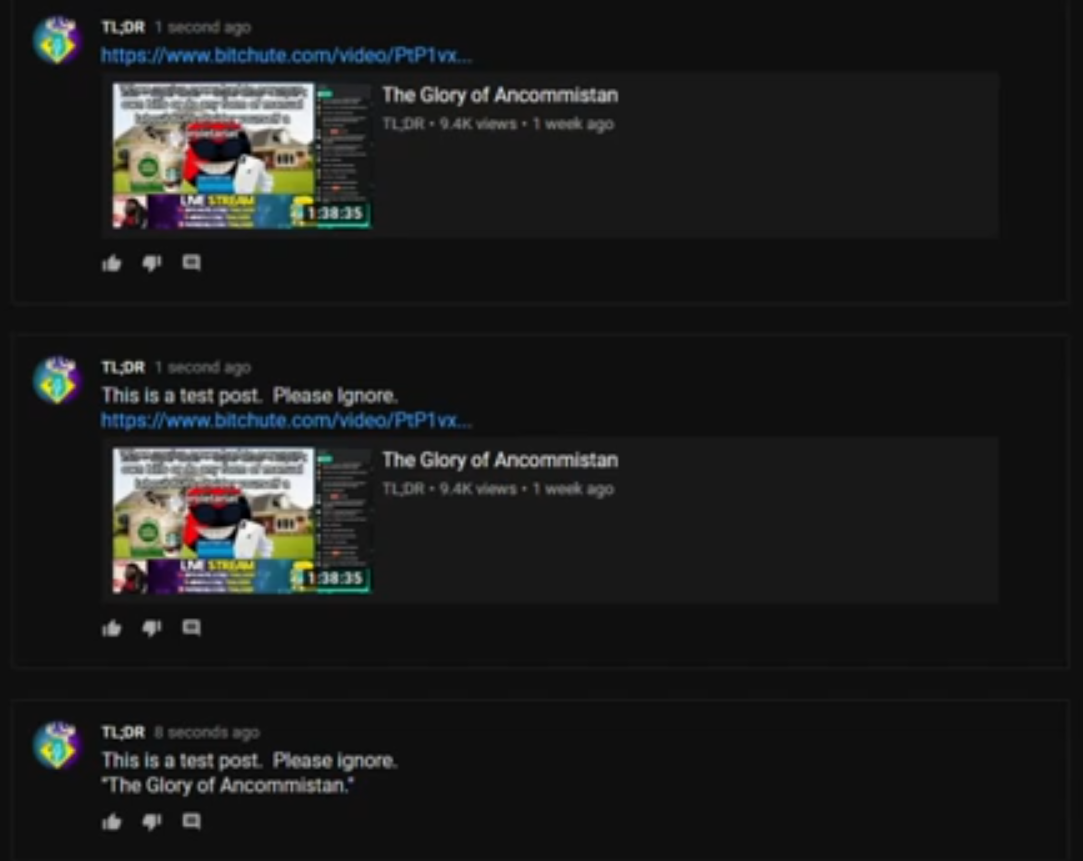 TealDeer suspects that there’s a measure in the algorithm that checks for the query “bitchute.com” in any of the comments or posts in order to redirect them back to YouTube.

Basically the link hijacking taking place ensures that even if people attempt to steer others toward a BitChute video, it won’t actually lead them to the video.

Shadow-banning posts that contain BitChute content also ensures that no one sees those posts, thus further limiting the exposure people have to said content.

It all just circles back around to the exact same results: limiting or prohibiting the exposure of BitChute content on YouTube.

I’m sure Centrists™ will use the excuse “YouTube is a private corporation and they can censor competitor’s links if they want!” and they would be wrong. Since Google currently has a monopoly on video hosting, purposely using their platform to censor or restrict users from freely sharing or discussing or linking to BitChute would be considered Exclusionary Conduct under the Sherman Act.

“Obtaining a monopoly by superior products, innovation, or business acumen is legal; however, the same result achieved by exclusionary or predatory acts may raise antitrust concerns.

“Exclusionary or predatory acts may include such things as exclusive supply or purchase agreements; tying; predatory pricing; or refusal to deal. These topics are discussed in separate Fact Sheets for Single Firm Conduct.”

In this case, YouTube has made it where you can’t even properly mention or link to a direct competitor who doesn’t even pose a market threat to their current monopoly.

That’s not to mention that BitChute has no significant market share on Google, nor any dominant positions in the search engines under general search terms for video content. For all intents and purposes they are the underdog, yet Google/YouTube is still going out of their way to further undercut their presence within their domains.

Unfortunately, unless there’s an actual intervention from law enforcement to penalize or break-up Alphabet’s monopoly through search engines, online advertising, and video hosting, none of this will change anytime soon.

(Thanks for the news tip BitChute)