Legitimately, how hard is it to make a decent Halo game? Despite the grand levels the original trilogy reached, the core concept slash formula was never all that complex. All it was, was a modern, at the time, science-fiction take on the lone hero versus insurmountable odds genre that has pervaded gaming since its inception.

Master Chief was just his generation’s science fiction Doom Guy, Gordon Freeman, B.J. Blazkowicz, Duke Nukem, etc. That statement isn’t meant to take away from what was achieved. Visually the games were a splendor, and that splendor amply complimented some well-honed gameplay mechanics.

Yet despite not needing to break new ground, 343 has consistently managed to screw up making a Halo game. Halo 4’s new lore additions, which should have seen us facing off against the Last Progenitor in the Milkey Way, needed to be retconned in Halo 5. Halo 5 believed it was a good idea to attempt to assassinate Master Chief’s character because the studio narcissistically couldn’t stand not having their own OC as the main character. Even the Master Chief Collection was and still is plagued with bugs and technical issues. At this juncture, they are well worthy of the criticism.

Now after the backlash and ridicule have set in, they’ve begun doing damage control for how bad Halo Infinite looks. Naturally, they’re claiming they’re getting more positive feedback than negative, as detailed on Halo Waypoint. I can’t imagine from where, as the community is divided between “way to screw up the lore,” “the game is ugly, way to go 343,” and Halo Loyalists, many of whom give their support, but still hate 343.

“Based on our learnings from Halo 4, Halo 5, and Halo Wars 2 – along with strong community feedback – we decided to shift back towards the legacy aesthetics that defined the original trilogy. With Halo Infinite, we’re returning to a more ‘classic’ art style which was a key message going back to the very first reveal that garnered enthusiastic and positive responses. This translates to a more vibrant palette, “cleaner” models and objects with less “noise”, though it doesn’t mean less detail. While we appreciate this may not be everyone’s personal preference, we stand by this decision and are happy to see it resonating with so many fans around the world.”

Alright two things, first 343 did not develop Halo Wars 2. They assisted Creative Assembly, who, with their experience in the RTS genre, developed Halo Wars 2. Second, in regards to returning to the classic art style and cleaner graphics, I’ll let these pictures rebuke that. 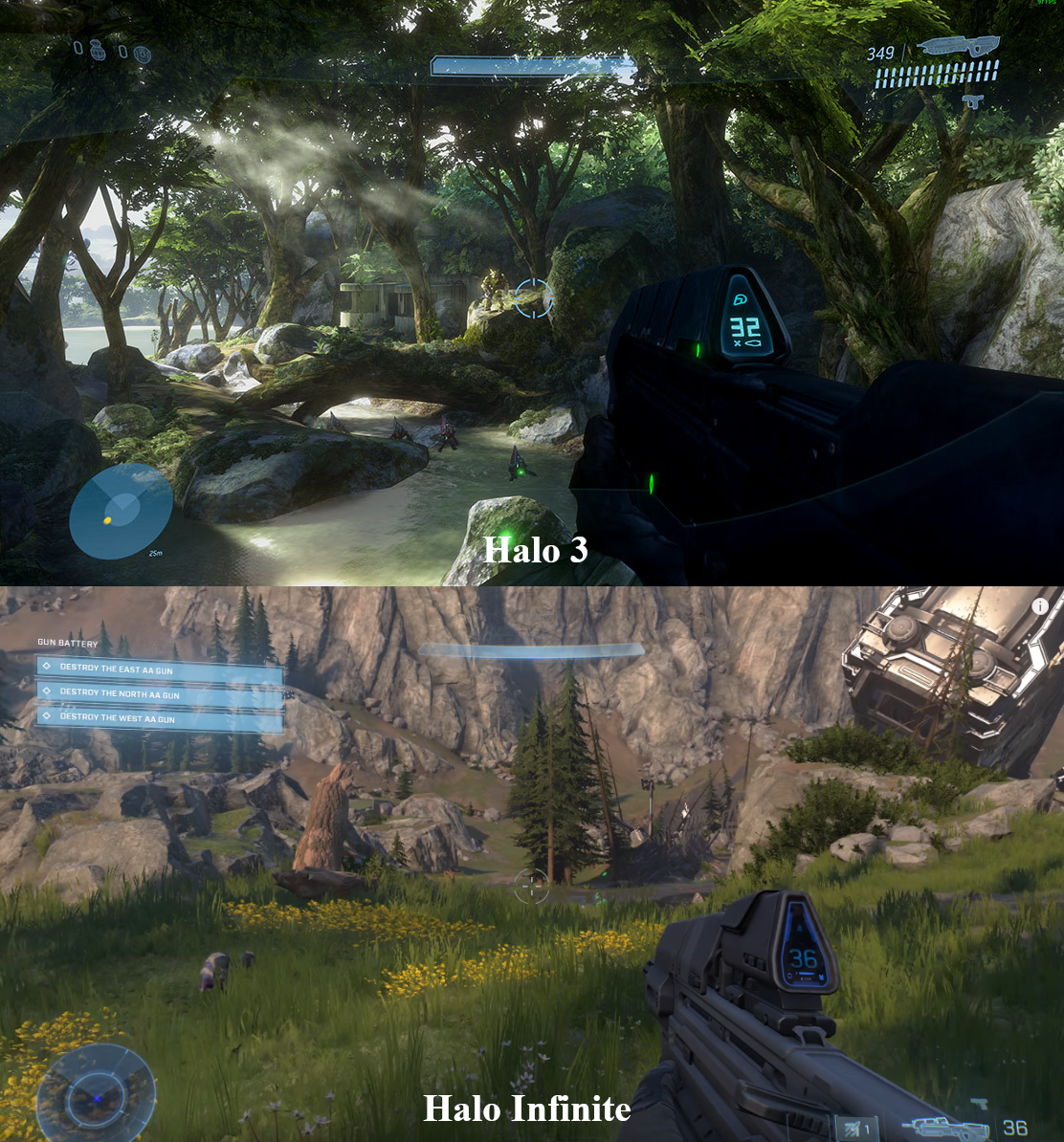 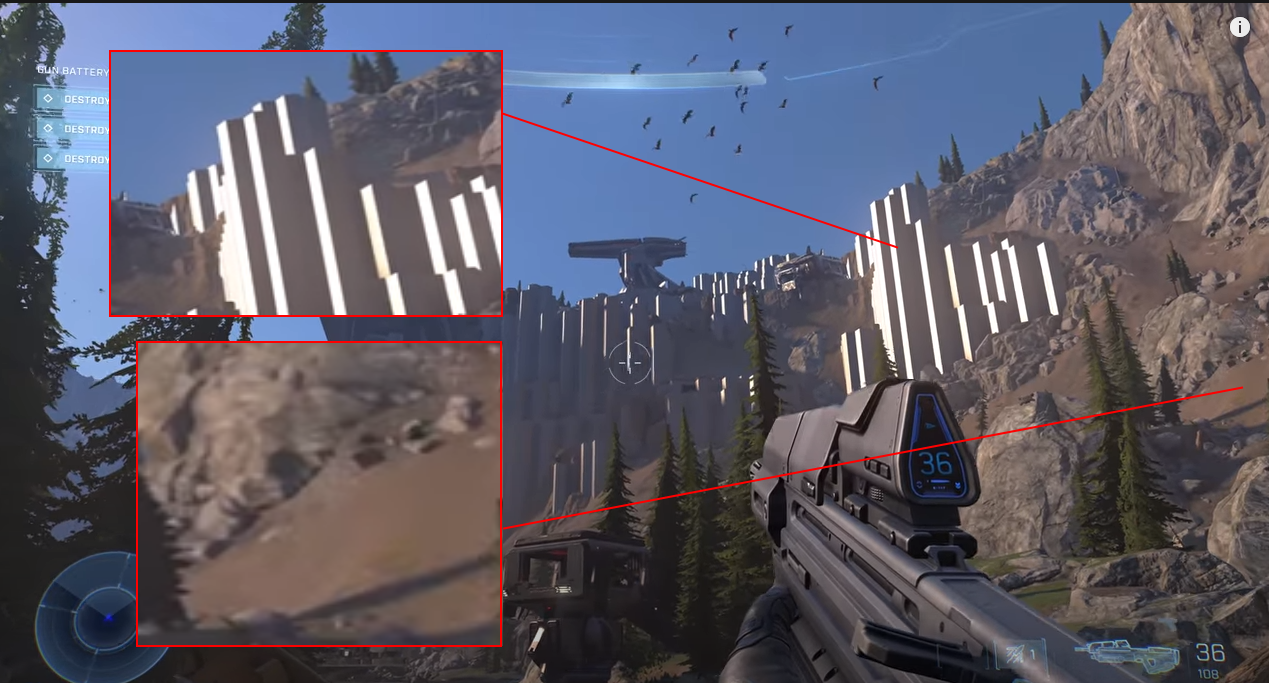 Continuing, they offer assurances: the visual fidelity of an open-world game will significantly increase by the time the game launches alongside the Xbox Series X in a few months.

“The second theme being discussed involves visual fidelity. Negative feedback in this area includes comments around characters and objects appearing flat, simplistic and plastic-like, lighting feeling dull and flat, and object pop-in. We’ve read your comments, we’ve seen the homemade examples of retouched content, and yes we’ve heard the Digital Foundry assessments. In many ways we are in agreement here – we do have work to do to address some of these areas and raise the level of fidelity and overall presentation for the final game. The build used to run the campaign demo was work-in-progress from several weeks ago with a variety of graphical elements and game systems still being finished and polished. While some of the feedback was expected and speaks to areas already in progress, other aspects of the feedback have brought new opportunities and considerations to light that the team is taking very seriously and working to assess. We don’t have firm answers or outcomes to share yet but the team is working as quickly as possible on plans to address some of the feedback around detail, clarity, and overall fidelity. The team is committed and focused on making sure we have a beautiful world for players to explore when we launch.”

Gotta love how the story of the age of the build continues to change. At first, it was a build from January, but then that claim bounced back and forth with it is a few months old. Now according to their official statement, the build is only a few weeks old, and they’re confident they can finish the game in only a few months.

That’s not going to happen. Realistically the visuals will have some improvement before launch, but we’re not going to see a night and day transformation. With Halo Infinite being an open-world game it is questionable if their engine can even load the fidelity they want to achieve, let alone if they have enough time in a few months to fix all the issues seen in the current build.

Flat out the game needs another year in development to get where it needs to be. That’s just the reality of the situation.