CDPR Has no Right to Complain About the Backlash

Before beginning, it must be said that by no means does this article justify death threats, targeted harassment, or threats of any manner. Though it will be contended based on marketing choices that CDPR invited this behavior upon themselves, that itself does not render the behavior appropriate or acceptable by any means.

Merely because there is vileness from some segment that will be discussed, does not invalidate the legitimate criticism the company is receiving over the sorry state the game has launched in. CDPR had multiple opportunities to present the game as it would function on each platform. Leaving the player to decide if they wanted to preorder the game with the knowledge it would look horrendous on the baseline PS4 and Xbox One.

Equally, CDPR infamously stated it wasn’t their responsibility to communicate which features had been cut from development properly. Setting aside legal arguments of false advertisement and legal duties, as a company, they cannot complain when people are angry after purchasing the game expecting features X, Y, and Z. Features they said would be in the game, then cut or set aside for DLC and only revealed this fact in an obscure interview or in a tweet most missed.

Some at launch were still expecting to be capable of purchasing multiple apartments as that was an initially advertised feature and a staple of the open-world genre. Later they cut the feature citing issues it would cause with the story, that they were willing to rewrite to remove pronouns, and only mentioned it in a few obscure interviews. Features such as business investment and mass transit were also described and removed from the game. Albeit if there is an obscure notification, I’ve yet to come across it. Instead, many took their silence as confirmation of their removal.

CDPR, as a company, cannot expect to behave in such a manner and not receive blowback. Were the law not several decades behind when it comes to video games, they’d be slapped with multiple fraud and false advertisement investigations in several nations for their behavior. Given Sony is issuing full refunds, it is unlikely the company would triumph in those investigations.

That, of course, is the justified backlash. Another group, egged on by the likes of Reset Era and the media, has taken to target harassing CDPR staff over what they view as abuse of the transgender identity. Do not expect anything sane from these people. One group says they are guilty because there weren’t enough transgender people in the game. With the other segment saying they were exploiting the trans identity by having any in the game.

Some people harassing the developers bounce back and forth between these two, so these aren’t exactly consistant people.

https://platform.twitter.com/widgets.jsThese people have harassed Senior Designer Andrezej Zawadski to the point he has voluntarily recused himself from social media for a few days to decompress and focus on his mental health. 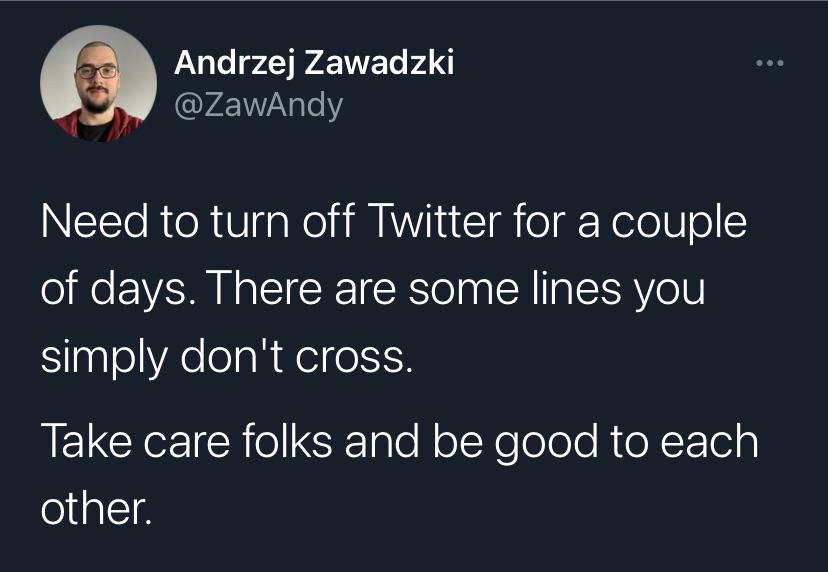 They are, however, people CDPR courted leading up to the release of their game. These are people that CDPR fired their staff over, rewrote the script removing pronouns for, and heavily pandered to believing it would boost their sales. In that regard, these groups are not wrong. CDPR does not care about their agenda or ideologies. They viewed them as a vehicle to increase sales, as most corporations do. They paid lip service to avoid harassment, so in a sense, they are guilty of the accused grievances.

It isn’t easy to sympathize with a company that invited these people into their audience despite repeated statements from these people indicating they would not purchase their game. These are people who called the creator of Cyberpunk 2077 a racist despite him being black. No rationale can be offered for willingly inviting these people into your demographic, yet CDPR did so and now have to deal with the toxicity they bring.

At the same time, their suffering is brought upon by their hubris and pandering. It does not render death threats, targeted harassment, doxing, or other extremely vile things levied their way to be justifiable. Perhaps CDPR will learn a lesson from this. That they should adequately communicate with their customers and let them know features are being cut or certain builds are not going to be a nice looking as others. A practical lesson, but more importantly, next time CDPR will learn not to pander to a group of toxic communities that have less interest in buying their products than they represent their respective demographics.