Sekai Project, who is on the Traitors of America master list, announced that they are planning to release Nekopara Vol. 4 this fall in November, 2020 for PC. The sexy-time visual novel will apparently be available on Steam, likely as an all-ages release. END_OF_DOCUMENT_TOKEN_TO_BE_REPLACED

Sekai Project and Sweet & Tea’s The Seventh Sign -Mr. Sister- has been banned from Steam. The game was originally added to Steam’s database back in February of 2020, but as of June 12th, 2020, the game has been banned. END_OF_DOCUMENT_TOKEN_TO_BE_REPLACED

Sekai Project and Dischan Media are keeping the waifus alive during the coronavirus pandemic. Their latest game is called Mahou Arms and it’s entering into Early Access on April 28th over on the Steam store. The game is a 3D hack-and-slash title that looks like a high-impact console game made for PC gamers. END_OF_DOCUMENT_TOKEN_TO_BE_REPLACED

Outfit Shadowwolf had previously announced that they would be providing gamers with an uncensored, unofficial R18+ patch for Sekai Project’s all-ages release of Baldr Sky on Steam. END_OF_DOCUMENT_TOKEN_TO_BE_REPLACED

[Update #2:] According to the lead translator on the project, Andrew Hodgson, Valve had no hand whatsoever in the censorship of Baldr Sky. The translator claims that Sekai worked with GIGA to produce the version of the game that matched the developer’s vision.

I’m the lead translator on this project. Your article is rooted in pure fabrication. Valve had no involvement in content decisions for this release. We worked with Giga to create a version of the game that conformed to their vision for a western release.

However, some users pointed out that Steiner made some questionable comments recently, on December 19th, 2019, admitting that whether people buy Baldr Sky from Sekai Project or not, it wouldn’t affect him.

“Sekai Project isn’t entitled to your purchase, no publisher is. But I hope people understand compromises are necessary sometimes. If your stance is “I would’ve rather had nothing than a version with cuts.” then eventually nothing is what the VN industry will be reduced to.

“So yeah, Baldr Sky won’t be getting an 18+ release in any official capacity. Just know that you’re only seeing the situation from the outside, you haven’t seen the process, or know what other demands might have been fought against successfully. Business is a complex web.

“I understand that this can be interpreted as me saying “You’re lucky for scraps” or “settle for less,” but the harsh reality of the situation is that we are beholden to the original licensor’s wishes for the most part. We work with and around that as best we can.

“It’s completely alright to be sceptical, Sekai has a bad track record. Not trying to guilt, either. Like I said, you don’t owe anyone a purchase. You don’t have to buy anything, it won’t affect me one way or another. My work ended the moment I submitted the files.”

While Hodgson claims that the censorship was requested on the part of GIGA, others pointed out that in the past Sekai Project has been responsible for the censorship, not the developers.

On December 19th, 2019 Twitter user Zakogdo linked to a Reddit thread regarding the censorship of Grisaia, which was on Sekai Project, not the developers. 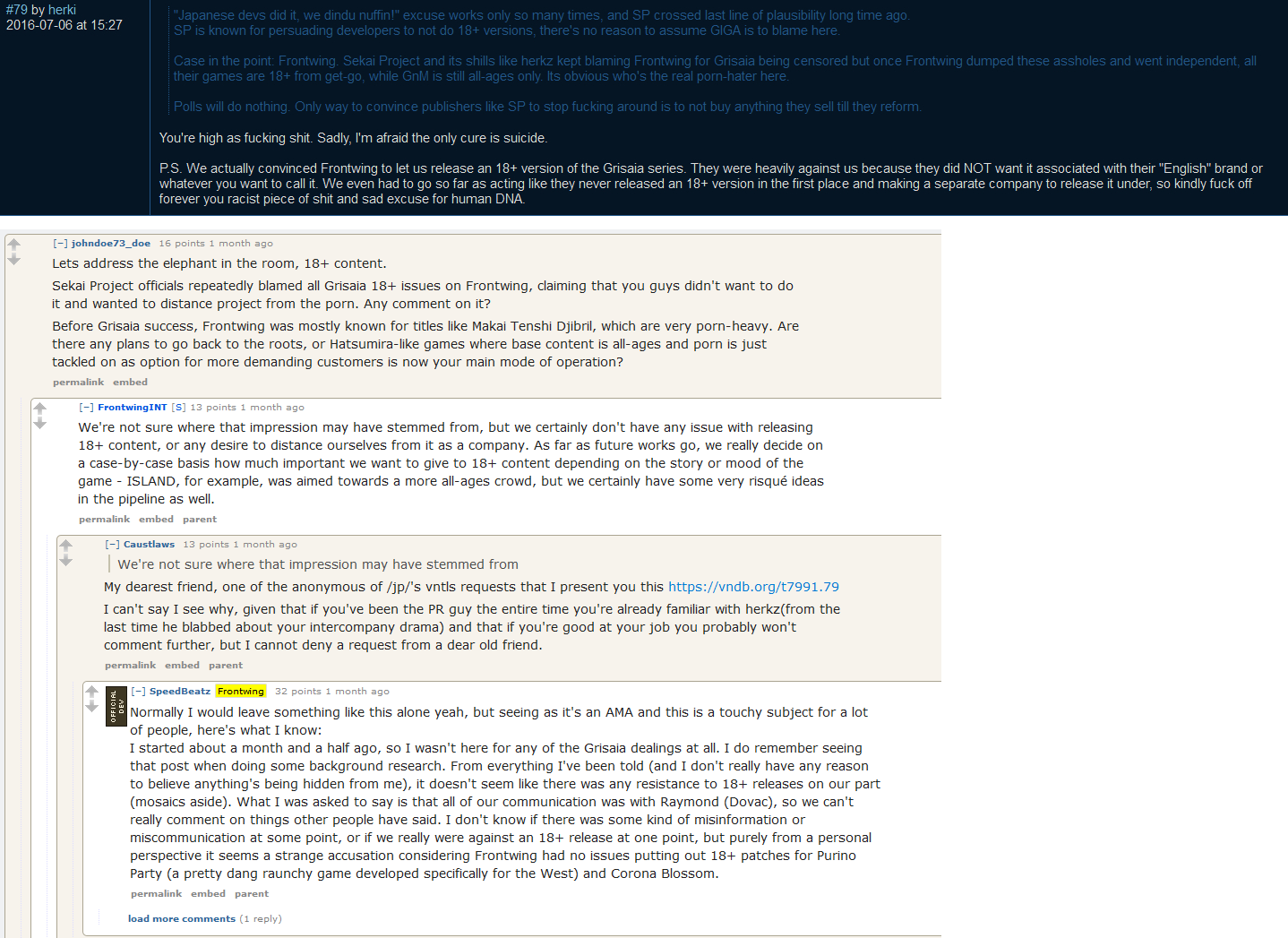 In the thread, Frontwing points out that since they make games containing R18+ content, they have no problems with it and that they don’t mind releasing R18+ versions of the game. In the thread, one of the members of Frontwing described their interaction with Sekai Project, where they wrote…

“Normally I would leave something like this alone yeah, but seeing as it’s an AMA and this is a touchy subject for a lot of peple, here’s what I know:
I started about a month and a half ago, so I wasn’t here for any of the Grisaia dealings at all. I do remember seeing that post when doing some background research. From everything I’ve been told (and I don’t really have any reason to believe anything’s being hidden from me), it doesn’t seem like there was any resistance to 18+ releases on our part (mosaics aside). What I was asked to say is that all of our communication was with Raymond (Dovac), so we can’t really comment on things other people have said. I don’t know if there was some kind of misinformation or miscommunication at some point, or if we really were against an 18+ release at one point, but purely from a personal perspective it seems a strange accusation considering Frontwing had no issues putting out 18+ patches for Purino Party (a pretty dang raunchy game developed specifically for the West) and Corona Blossom.”

This still doesn’t explicitly answer who really is at fault for Baldr Sky’s censorship, but it certainly raises questions about the blame being placed on GIGA.

[Original article:] Sekai Project was forced to censor out all of the R18+ content for the Steam release of Baldr Sky, the isometric action-RPG with visual novel sequences. It was actually worse than that, and Sekai Project nearly had to censor all of the religious content in the game as well, but Sekai managed to limit the censorship to just the R18+ content. END_OF_DOCUMENT_TOKEN_TO_BE_REPLACED

A number of games have been banned from Steam recently, in addition to Valve rejecting VenusBlood Frontier’s all-ages English release. Ninetail are trying again in hopes of getting a more censored version of the game approved for release on Steam, but it’s not looking good. There’s a Google document that reveals all the recent games that have been banned from Steam, and the ones in the headline are just a few of many. END_OF_DOCUMENT_TOKEN_TO_BE_REPLACED

Whirlpool and Sekai Project’s NEKO-NIN exHeart 3 is currently available right now on Steam and the Denpasoft store. The game launched censored on Valve’s digital distribution platform due to Valve’s wonky rules when it comes to anime-themed games, but don’t worry… there’s an R18+ patch available. END_OF_DOCUMENT_TOKEN_TO_BE_REPLACED

I don’t know if it will make it to the finish line, but Sweet & Tea and Sekai Project’s How To Raise A Wolf Girl is set to release on Steam and Denpasoft starting October 11th, 2019. We’ve seen some visual novels get their store pages approved on Steam but then end up getting banned right on the eve of their release, which is what happened to Lilith’s Taimanin Asagi, where it was banned just before launch. END_OF_DOCUMENT_TOKEN_TO_BE_REPLACED

Silky’s Plus Wasabi, Silky’s Plus Alpha, and Sekai Project announced that the visual novel Nanairo Reincarnation is making its way to the Steam store at some point in 2019. END_OF_DOCUMENT_TOKEN_TO_BE_REPLACED

33Paradox’s Victory Project was one of the many all-ages games that were banned from Steam for completely ridiculous reasons. Valve used the “child exploitation” excuse to get the game off the platform, but wouldn’t and couldn’t explain what about Victory Project contained child exploitation. Well, the developers are receiving some form of vindication thanks to Sekai Project stepping in to publish the game on a number of other platforms later this year. END_OF_DOCUMENT_TOKEN_TO_BE_REPLACED

The latest escapade involving anime tiddies on Steam involves the R18+ DLC patch for NEKO-NIN exHeart 2 Love +PLUS, which was denied release on the platform, effectively preventing users from being able to conveniently download the patch directly from Valve’s digital distribution outlet. END_OF_DOCUMENT_TOKEN_TO_BE_REPLACED

Handful of visual novels and their R18+ patches have been banned from Steam. One includes Banana King’s second attempt to get The Last Girl: Janna’s Diary of Shame onto Steam after Valve let his other game through, Broke Girl, but alas it was still denied entry. END_OF_DOCUMENT_TOKEN_TO_BE_REPLACED

Developers and publishers are wising up to the way the curation system works on Steam. Valve may have instituted the Adults Only filter and claimed that they would no longer be the “taste police” for anything that wasn’t “illegal” or “straight-up trolling”, but they quickly reneged on that when various employees began to selectively ban certain games from the storefront. Well, developers had to get real savvy, real quick. They decided to go back to the old way of doing things: launching the all-ages version of a game on Steam, and dumping the R18+ patch on a page off-site. END_OF_DOCUMENT_TOKEN_TO_BE_REPLACED