Deadline Games and SCi Games’ 2005 third-person shooter, Total Overdose: A Gunslinger’s Tale In Mexico is one of those hidden gems from sixth gen that came out during a time where anything third-person or open-world related was likely overshadowed by all the other GTA-style clones that flooded consoles during that time. However, despite its simplistic nature, dated graphics, and unrefined execution of some fun-filled concepts, Total Overdose was definitely a game of its era and well worth a playthrough if you’re looking for a machismo-filled shooter that puts fun at the forefront of the experience. END_OF_DOCUMENT_TOKEN_TO_BE_REPLACED

I don’t have much hope for the remake of the 2002 classic, Mafia, but there’s no denying that the new version of the 18-year-old game actually does visually look impressive. A near 15-minute demonstration was rolled out to give gamers a glimpse into what they could expect from the new version of the game. END_OF_DOCUMENT_TOKEN_TO_BE_REPLACED

Perhaps it is a bit of a flex, but unlike others, I’ve genuinely enjoyed the zombie genre. When the first State of Decay was released, people marveled at the mechanics and systems in place, but to me, it just felt like a watered-down 3D Rebuild. Rebuild being a flash game with a similar concept and vastly better execution. As it does not create an artificial limitation by limiting your base range. END_OF_DOCUMENT_TOKEN_TO_BE_REPLACED

Cross-platform multiplayer third-person shooter, Rogue Company, from Hi-Rez Studios and First Watch Games is currently available for download on the Xbox One, PS4, Nintendo Switch, and from the Epic Games Store for PC, which is a real shame for people who don’t want to support anything affiliated with the CCP (i.e., Tencent). END_OF_DOCUMENT_TOKEN_TO_BE_REPLACED

There’s a new game in the works being developed by Invictus Games and published by Zordix called Dustoff Z. Now before you sigh and sign off from paying any mind to this game, take note that it’s not yet another typical zombie survival game… even though it is a zombie survival game. END_OF_DOCUMENT_TOKEN_TO_BE_REPLACED

Any hope that Ubisoft’s overhaul of Ghost Recon: Breakpoint could save the game was shattered with the unveiling of the politically charged Resistance live event. The event will run from July 16th to the 29th and feature a ragtag group of people taking on a highly advanced military force, and presumably not being immediately slaughtered for their effort. END_OF_DOCUMENT_TOKEN_TO_BE_REPLACED

Since AAA publishers refuse to make games for real gamers and have resolved to filling their games with “modern” approach, many of us have had to resort to playing only games in our back catalog. One game that was well worth the journey into the seventh gen history books is Square Enix and Konami’s Front Mission Evolved, a third-person mech shooter for the Xbox 360, PS3, and PC, featuring hot chicks and plenty of big robots to boot. END_OF_DOCUMENT_TOKEN_TO_BE_REPLACED

Are you looking for a mecha game to play this month? Specifically, are you looking to play a turn-based mecha game? If so, then Orbital Speed Studio will release Dual Gear sometime this month for PC via Steam Early Access. END_OF_DOCUMENT_TOKEN_TO_BE_REPLACED

[Update:] According to Anna from Guerrilla Games, who commented in a forum post, apparently they didn’t get the age ratings for Horizon in specific Middle-Eastern regions, and so that’s why the game isn’t available there yet. 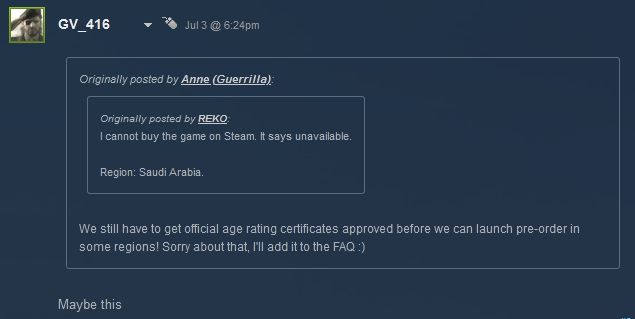 [Original article:] Guerrilla Games — who is on the Traitors of America master list — is re-releasing Horizon: Zero Dawn on Steam for PC starting August 7th, but it won’t be available in every region around the world. END_OF_DOCUMENT_TOKEN_TO_BE_REPLACED

They really don’t make ’em like this anymore. As some of you know I’ve gone back to playing and reviewing older games since almost every new AAA title is filled with pozzed degeneracy and Left-wing propaganda. Now while I don’t have a whole lot of good to say about Army of Two: The 40th Day, which is a sequel to the 2008 outing of Army of Two, I can readily say that it’s a testosterone-filled third-person shooter that sits at home as a decent (if not moderately entertaining) Gears of War clone that came out during the heyday of the brown-and-gray palette monopoly. END_OF_DOCUMENT_TOKEN_TO_BE_REPLACED

Vblank Entertainment’s Shadkwdown: Hawaii seems like one of those games that has had a rather rocky development cycle. It came onto the scene many years ago, and then it went silent, and then it re-emerged as a timed exclusive on the Epic Games Store and home consoles, and now it’s launching on the Wii and Wii U later this year. END_OF_DOCUMENT_TOKEN_TO_BE_REPLACED

Sony and Naughty Dog’s The Last of Us: Part 2 has reportedly broken a record when it comes to PlayStation exclusives. As per a new report, over 4 million people have consumed the game filled to the brim with propaganda topped off by Neil Druckmann and Halley Gross’ appalling writing. END_OF_DOCUMENT_TOKEN_TO_BE_REPLACED

Earth Defense Force’s publisher D3, announced today two new games are in development for the series. A mainline entry that will be released sometime in 2021 and another spin-off developed by Yuke set to release later this year. END_OF_DOCUMENT_TOKEN_TO_BE_REPLACED